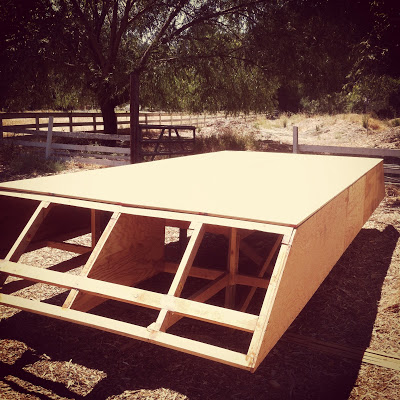 It looks easy, right?  What could go wrong?  Four rectangular sheets of plywood lined up together on a horizontal surface made to fit them, screwed down on all the edges.

But as soon as we started sheeting the bottom of the boat, we realized this seemingly simple task would be more complicated.  How do we jockey all these sheets of plywood into perfect alignment, secure them together,
turn them over to apply epoxy and then put them back into perfect
alignment before screwing them down.  And somewhere in there, we had to
apply butt blocks to where the sheets came together.

We tried laying out the plywood correct side down and applying one of our patented temporary butt blocks to hold the ends of each sheet to its corresponding partner.   But when we awkwardly tried to turn this paired 16 foot long überblatt over, the warblinesss of it pulled those temporary butt blocks out, causing us later grief.  So we tried another tack. 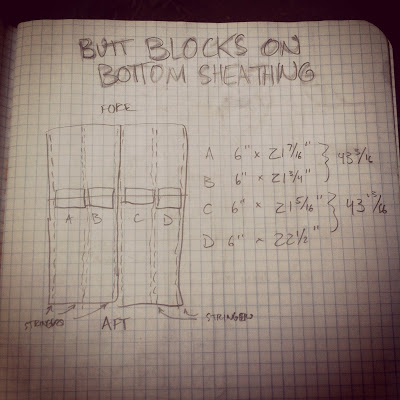 The plans called for butt blocks at the place where each plywood sheet met another at its short end.  Got that?  Read it a couple more times.  (No butt blocks were needed on the center line because the sheets met in a butt along the keel stringer.)  So we realized we could install the permanent butt blocks and the strength of these would allow us to manipulate each pair of plywood sheets. 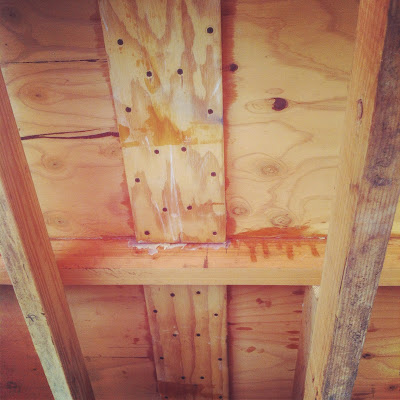 These butt blocks were a little trickier than the single butt block on each side stringer because they needed to be installed in the spaces between each of the stringers.  So installing the butt blocks looked like this:

Whew.  And this is only a preliminary step (but really one of the most complicated).

After this cured, we had two pairs of plywood joined end-to-end that were pretty bombproof and could be manipulated awkwardly, but safely. 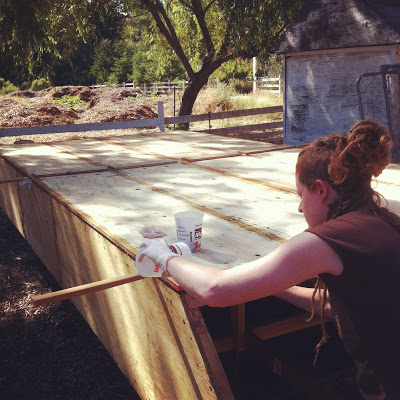 Somewhere in all this, I found time and space to give all the top surfaces of the boat a first thin coat of epoxy.  Now we gave the hull sheeting a first coat where it would join to the stringers.

We gave that time to become tack-free so manipulating these long joined pieces would be easier.  We took the plywood off the top, and gave the top surface of every stringer a second coat of thickened epoxy.  We also epoxied the edge of the plywood where the two long pieces would meet each other along the keel stringer.  Then we awkwardly person-handled the sheeting into place. 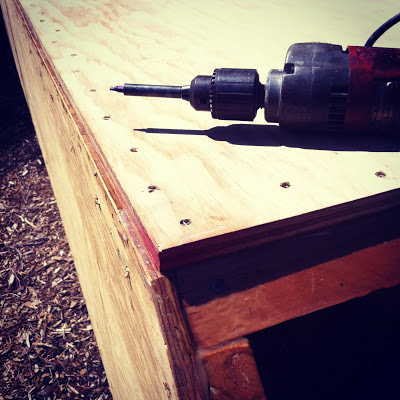 We put in a few screws to hold the sheets in place, and then went around and put screws every three inches.  Kai gave each screw a little tap with the hammer to get them started.  This made my finishing the screw with my power drill that much easier and faster. 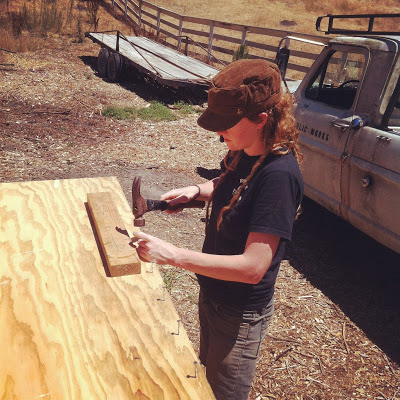 So with screws 3 inches apart on all of edges and 6 inches in the center, it was by far our most screwy day at 448 screws. With all these screws, we got afraid that by the time we got around to the final side the epoxy would have cured, so we put in every third screw on all edges and then went back and filled in. 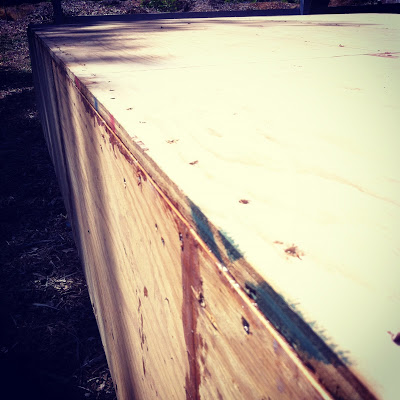 After this, it was kind of exciting to get up on the boat and be able to stand there.  Of course it’s upside down, but still.  It felt a lot more boaty than the piles of lumber and sawdust and sticky epoxy goo we’d been playing with previously.

After the bottom sheeting cured, I was able to release the come-along which has squared the boat during this procedure.  I was relieved that slowly de-tensioning the come-long was a non-event with no creaky or poppy complaints from the boat.  Sweet.