You already knew we had a month-long exhibition at the Sacramento History Museum. During all of July, we had an installation on the third floor of the museum. 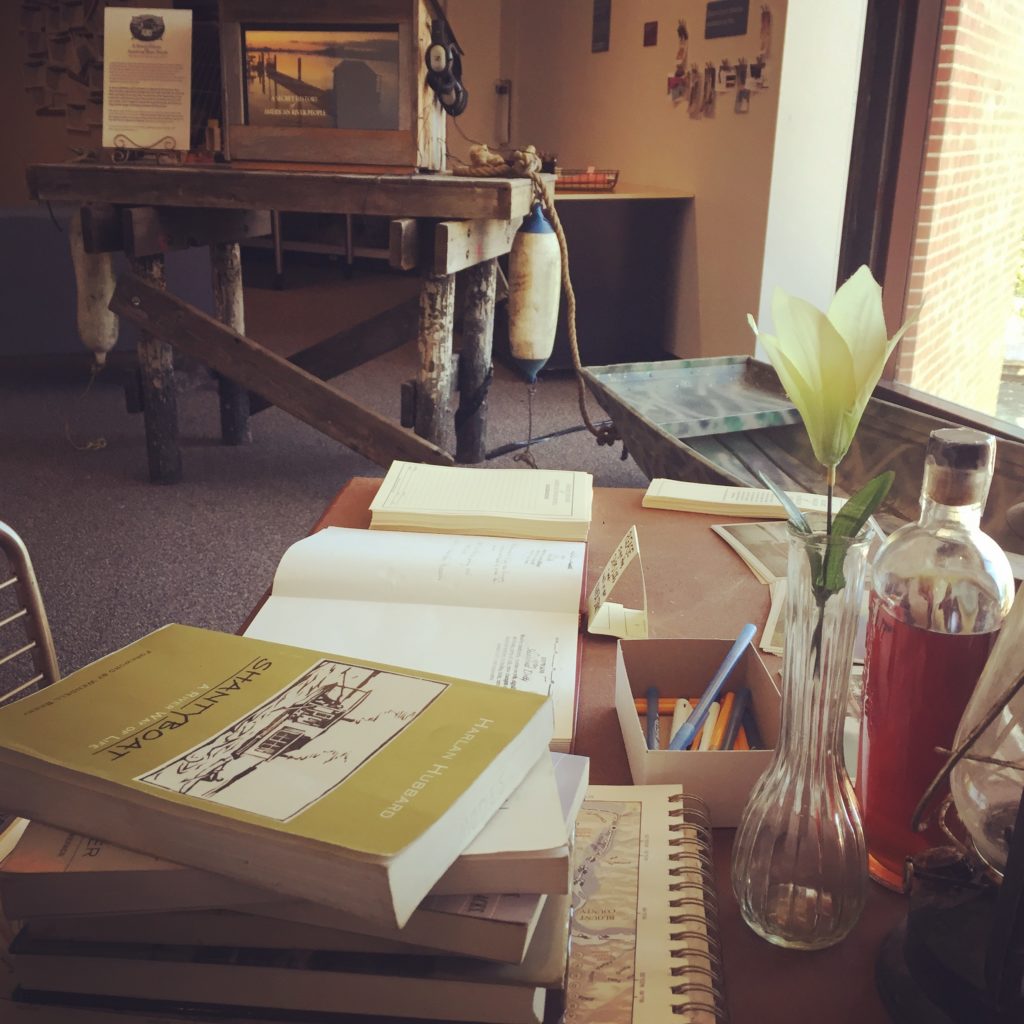 The installation featured video from our journeys and excerpts from interviews. The installation invited people to sign the ship’s log and leave their river stories and maybe take a sneaky sip of Peachy Fire Whiskey. 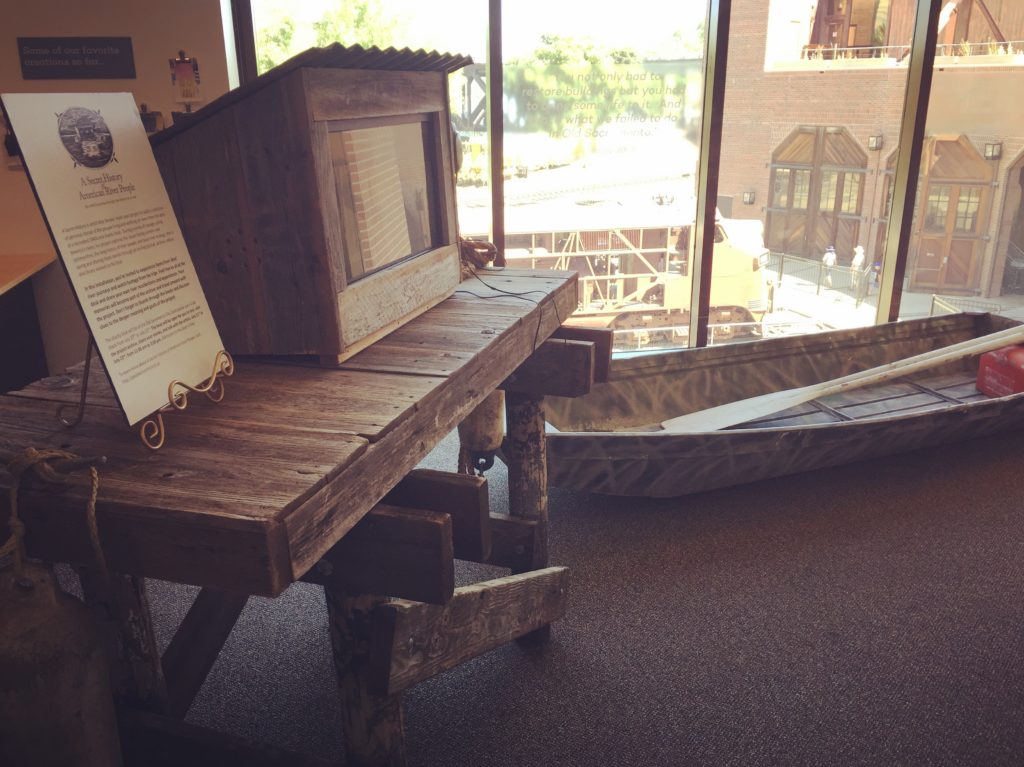 We edged into Sacramento in late afternoon passing first the mouth of the Feather River and then the American River, both tumbling down from the Sierra foothills. Our favorite feature of the Sacramento waterfront was the I Street railroad bridge over which trains regularly tooted and roared.

We were chased away from the more rustic docks used by the Delta King and the Sacramento Hornblower, after the security guard yelled us before we even got near the dock (foreverafter, referred to as the Dickblower). We settled for the public docks below Joe’s Crab Shack. 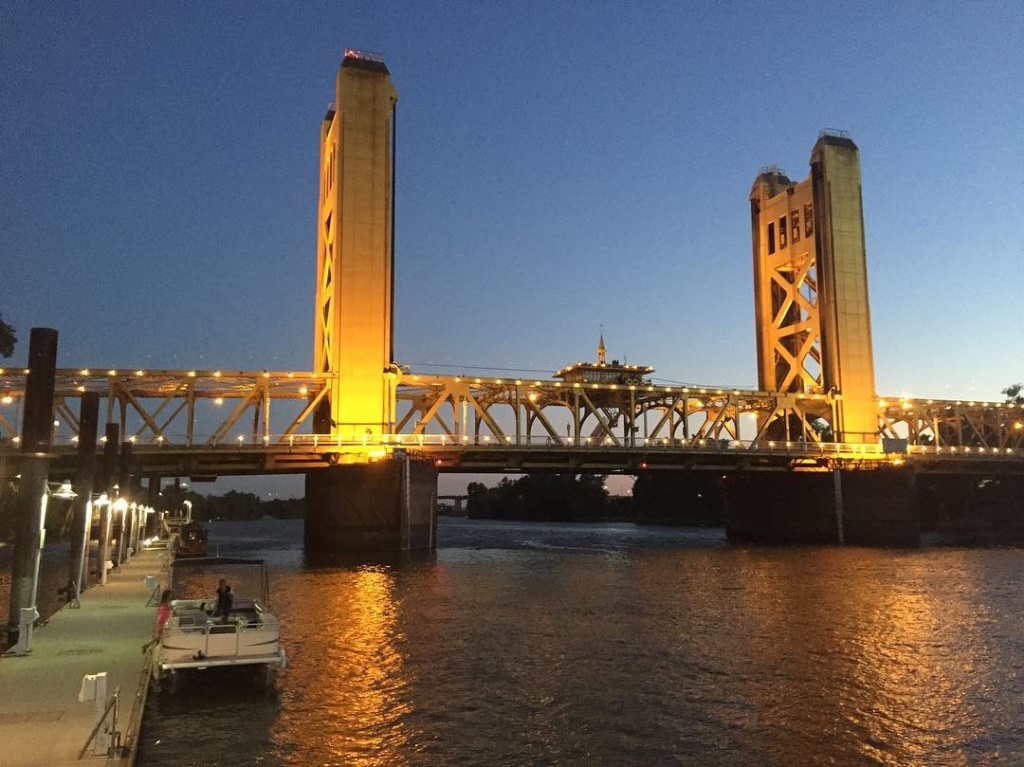 We wandered around Old Town a bit before collapsing exhausted after a long day on the river into our bunk. But sleep wasn’t in the cards down at the Old Town public docks. Just as we were falling asleep, our friend Mark Chang came and found us in his little party barge. I had a blurry half hour conversation with him. Then there were the Loud Dudes in party boats hanging out until four in the morning, and big boats tearing up the river under the Tower Bridge kicking up a big wake. Inexplicably, it seems people were throwing large objects (traffic barricades? sheets of plywood? couches? refrigerators?) off the bridge now and then to come crashing down among the waterfront businesses. And then there was the Wee Hours Illegal Fireworks Show. We didn’t make the mistake of spending the night there again.

Instead, we starting motoring up the American River in the evenings. It finally gave some credence to the frequent misunderstanding that we are exploring the lost history of American River people. In fact, our first afternoon up on the American River which runs along the north edge of Sacramento’s downtown, we noticed a lot of folks who were camping out along the river. People upriver had told us we should look for these folks.

We met Bar who had a tidy camp on a small hill above the river. Bar has been camping out for 25 years, mostly in Santa Cruz, has been in Sac for nearly a year. He serves as a mentor to younger folk and describes himself as an “honest hustler.” He told us about half the folks out there were fucked up on meth or heroin, but that about half were clean and out there for economic reasons or by choice. 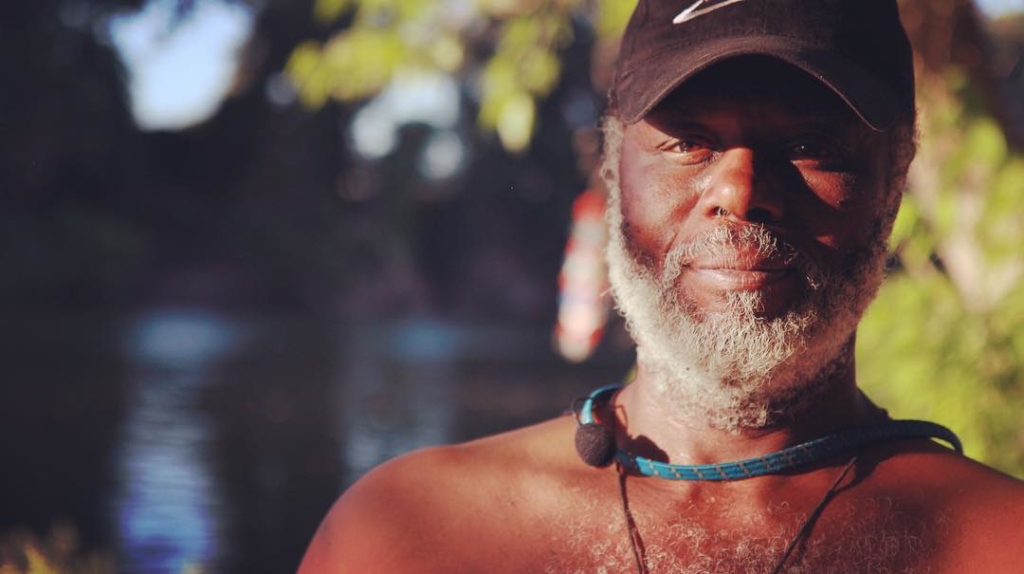 Bar lived along the American River

He told me that the Park Rangers tell him that if he keeps his camp clean, they won’t mess with their camps. He contrasted that with the police, sheriffs, and rangers in Santa Cruz who seemed to take special glee in destroying the homes of homeless people.

Bar was a thoroughly delightful fella to talk to.  After meeting and talking to mostly white well-heeled middle-aged guys on the river for the last several weeks, his perspective was refreshing.

For the next several days of our Sacramento engagement, we would spend our free time on the American River. As the weekend drew closer, we started seeing more and more large boats on the river. In places, people rafted their boats together almost blocking the river, a phenomena we called the “Yacht Wall.” 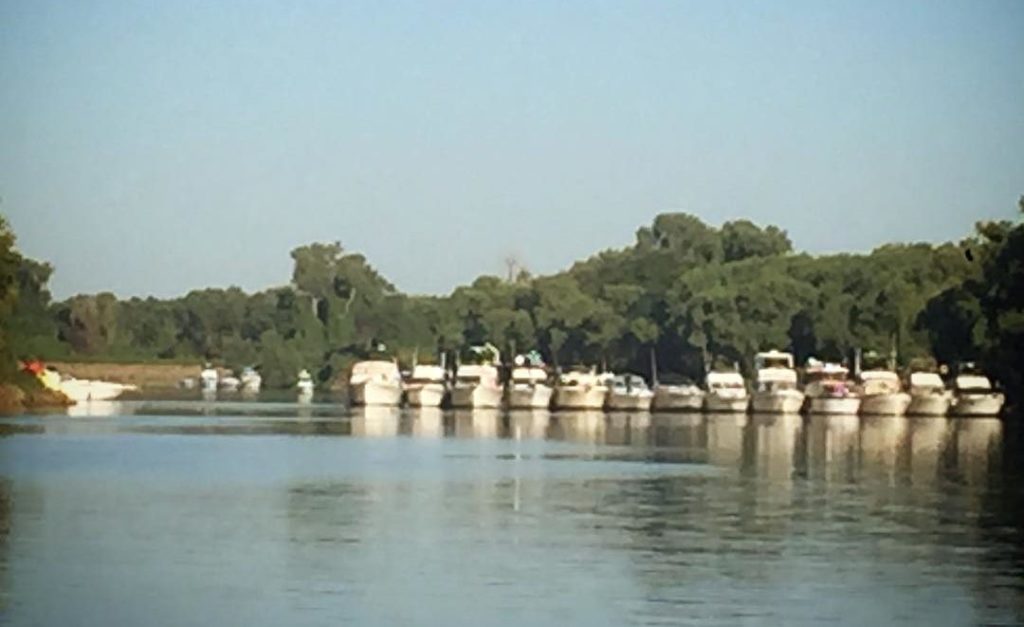 This required us to go further upstream for a modicum of privacy (read: skinny dipping). We were very near Sutter’s Landing.

On one of our trips we met a guy motoring about in a tiny boat who was searching for buried treasure. Clyde wore a metal detector that he said he never left home without. He and his girlfriend combed the beaches on the Sac and American Rivers finding treasures that had washed out of the riverbanks. Thousands of old bottles, old Spanish silver coins, brass buttons, rusty pieces of metal, belt and suspender buckles, Chinese and Japanese pottery, arrowheads, pieces of pipe and cable, every old thing you could think of, most of it heaped in makeshift dumps along the rivers. 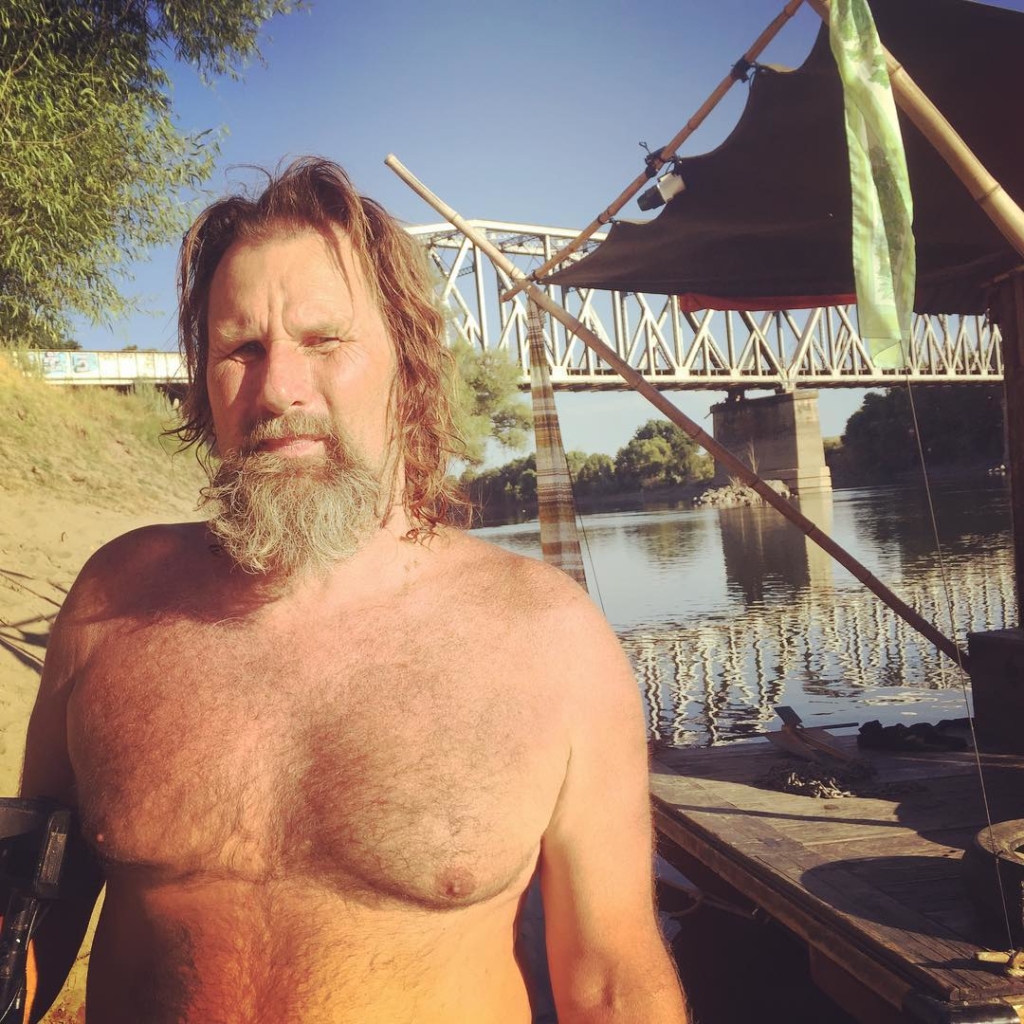 Clyde and his girlfriend searched the beaches of the Sac and American Rivers finding treasures that had washed out of the riverbanks. 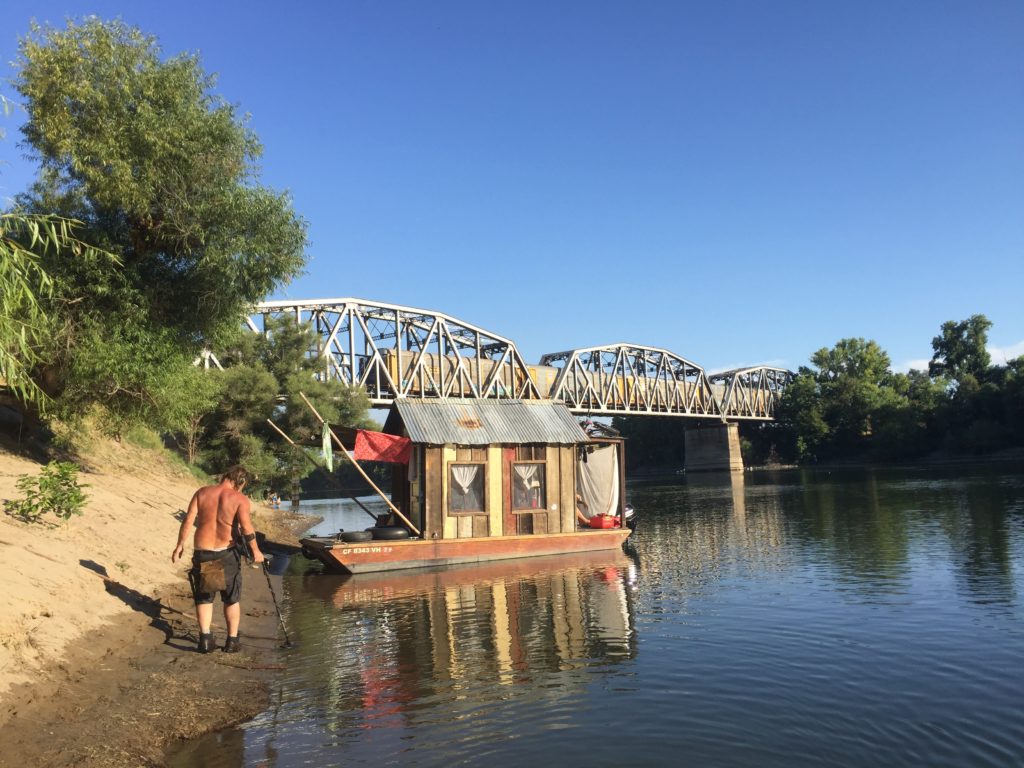 Shantyboat beached along the banks of the American River

In contrast to our hellish night in Old Town, nights on the American River were peaceful and beautiful punctuated by an occasional freight train screaming by across the train bridge. 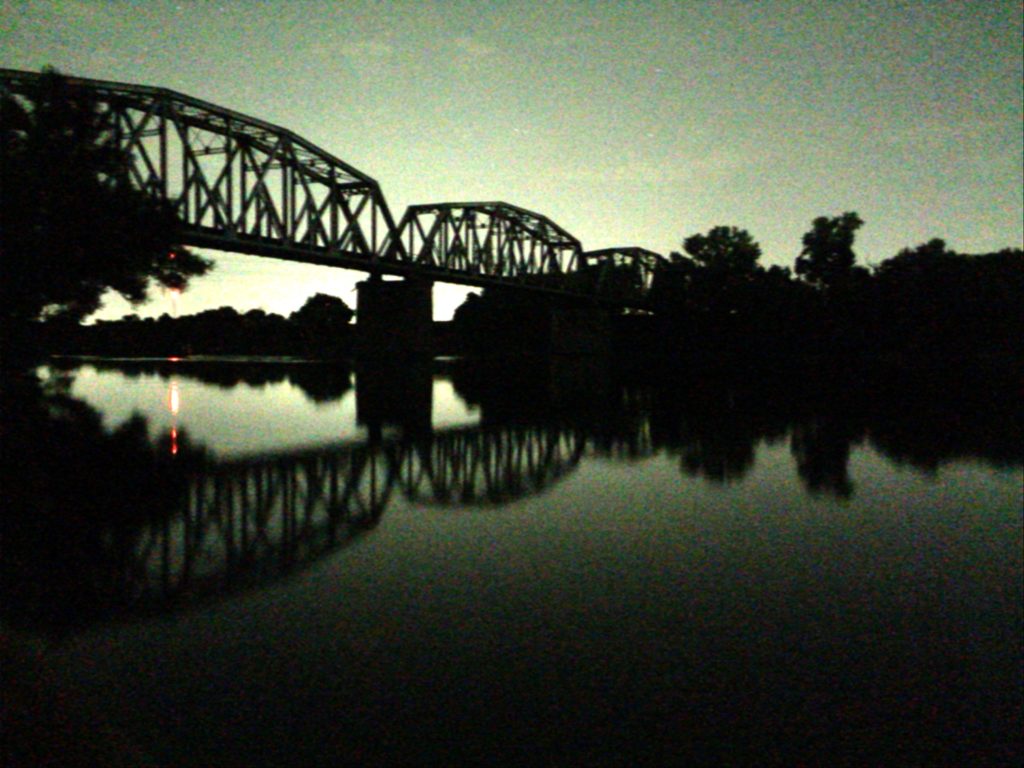 Train bridge on the American River

And then there were baby ducks. 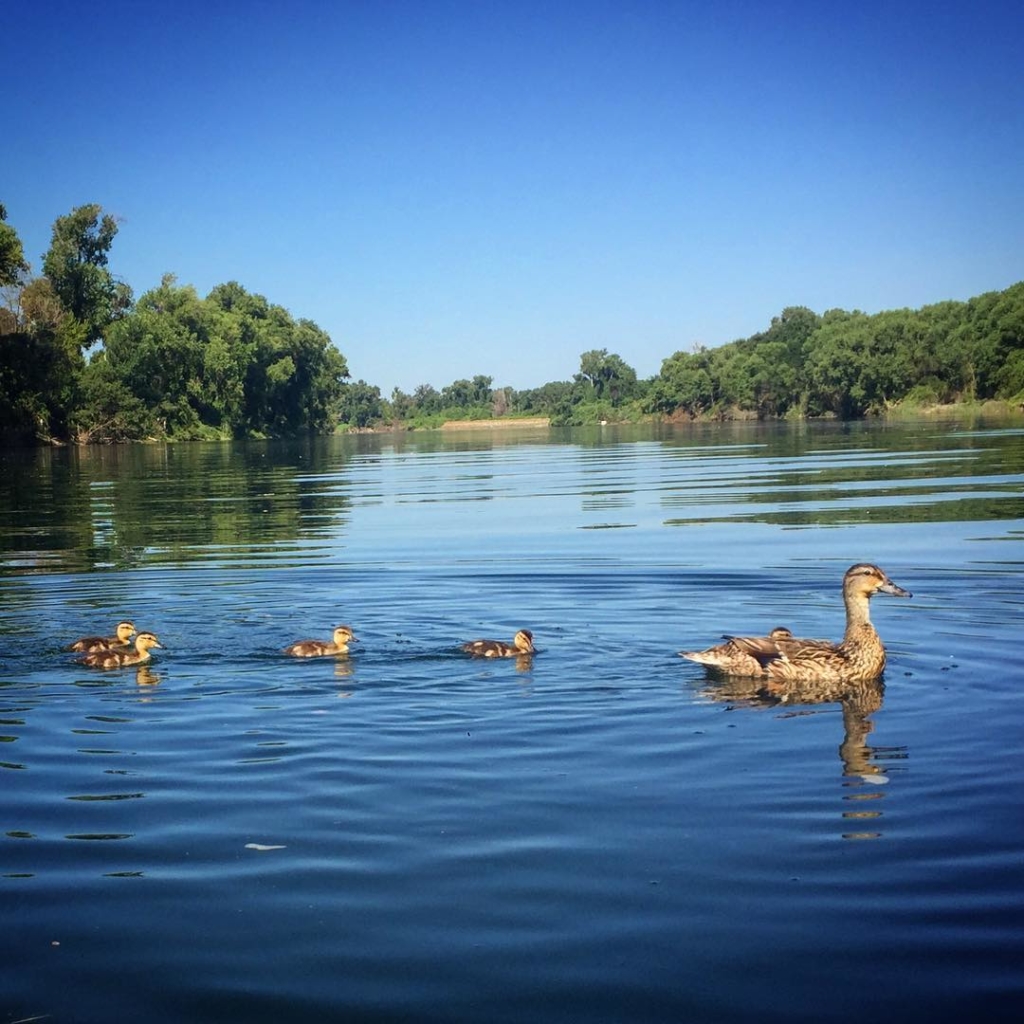 The Cutest Thing in the World

Every day in the middle of the day, we’d host an open (boat)house down along the docks in Old Town. We saw hundreds of people down there and talked to them about their memories of the river. 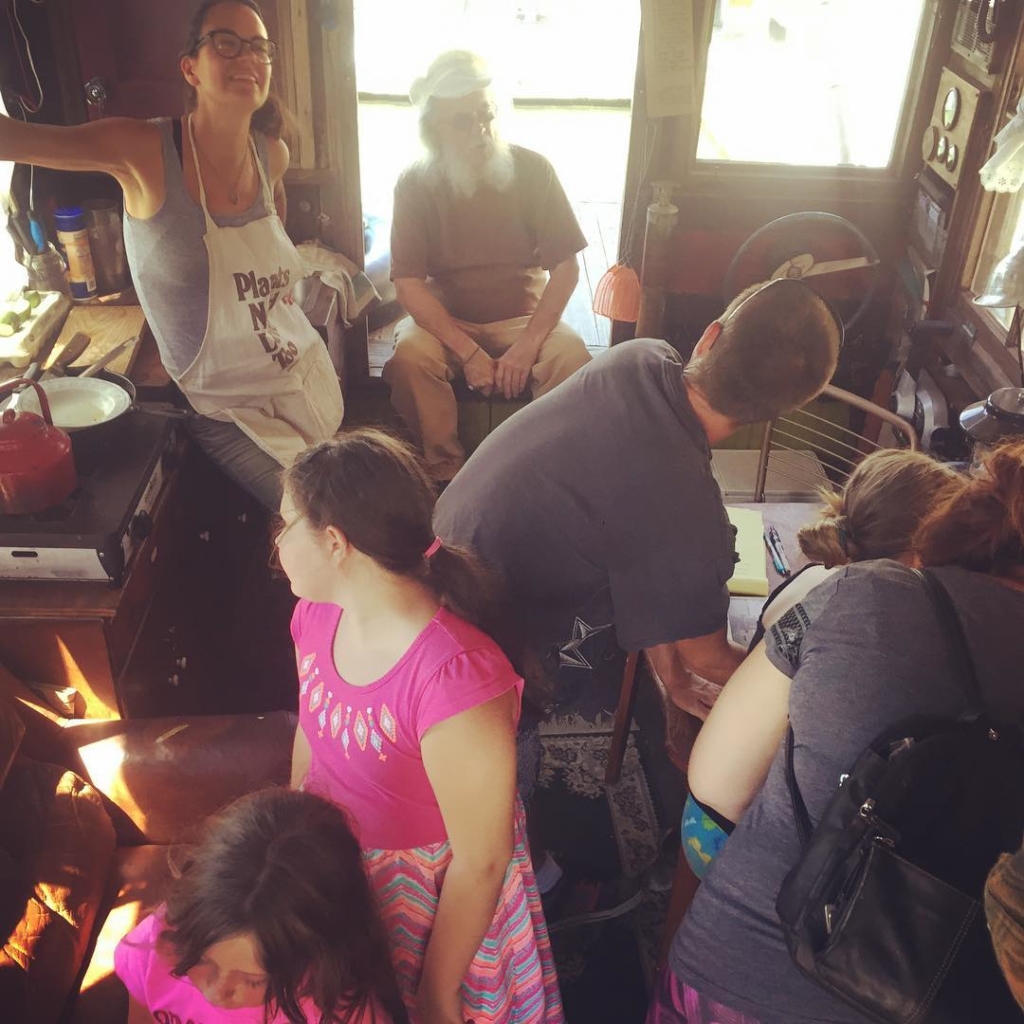 Visitors during the shantyboat open house

We met a ton of very knowledgable folks and set up a slew of interviews. 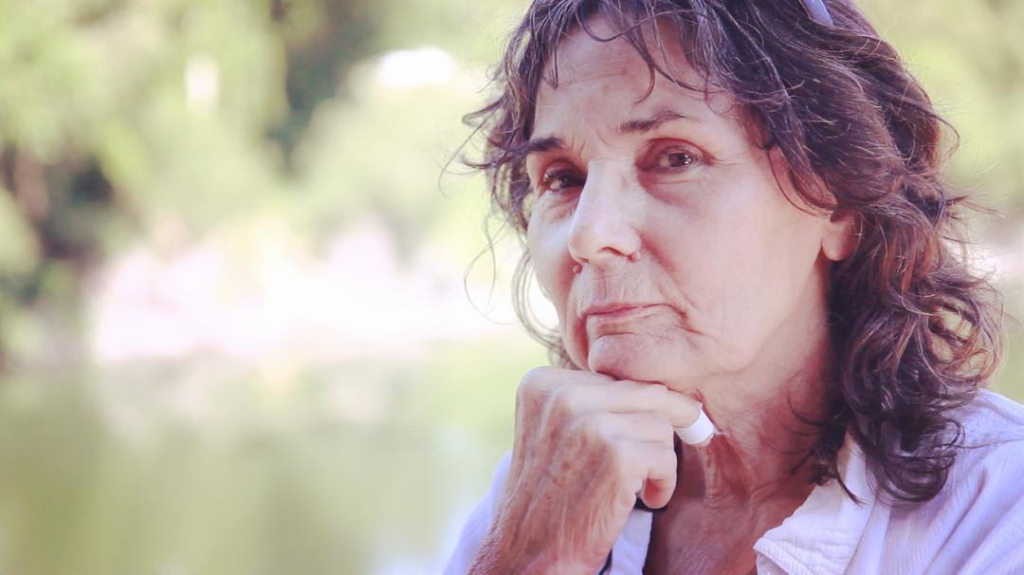 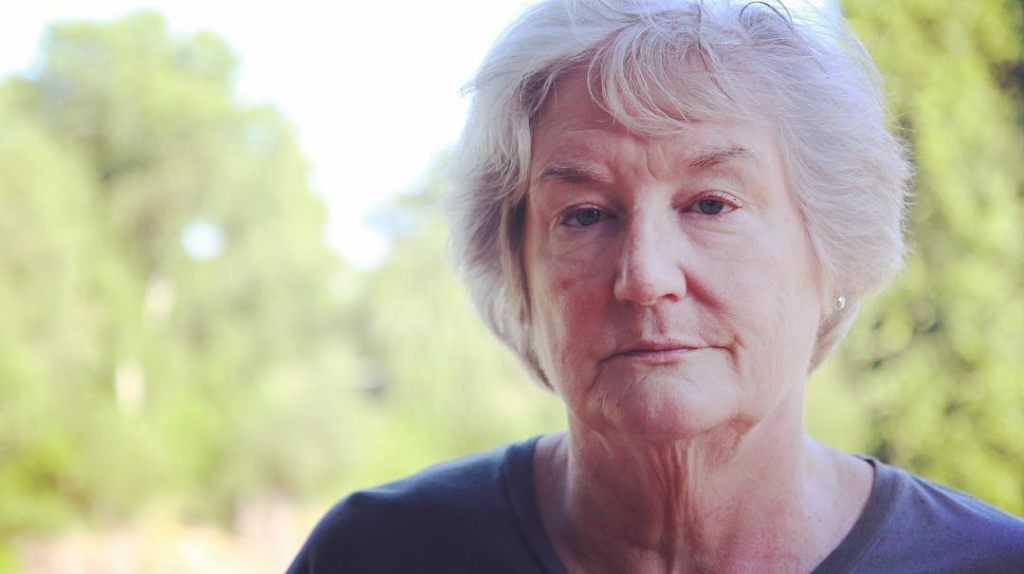 Interview with Kathy Brunetti. We talked about her decades of experience working on agriculture and water quality on the Sacramento River 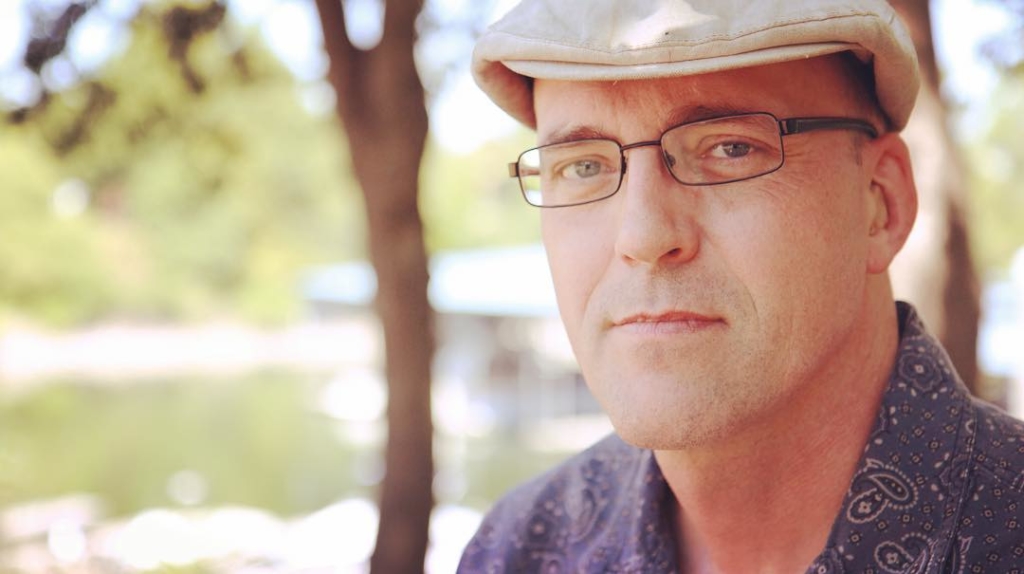 3rd interview of the morning with Andrew McLeod, historian and tour guide, who told me about Sacramento topography, land use, native and early settlement history, class and racial politics, collective organization, revolutionary conflicts, and the future of the city in the inevitable flooding to come 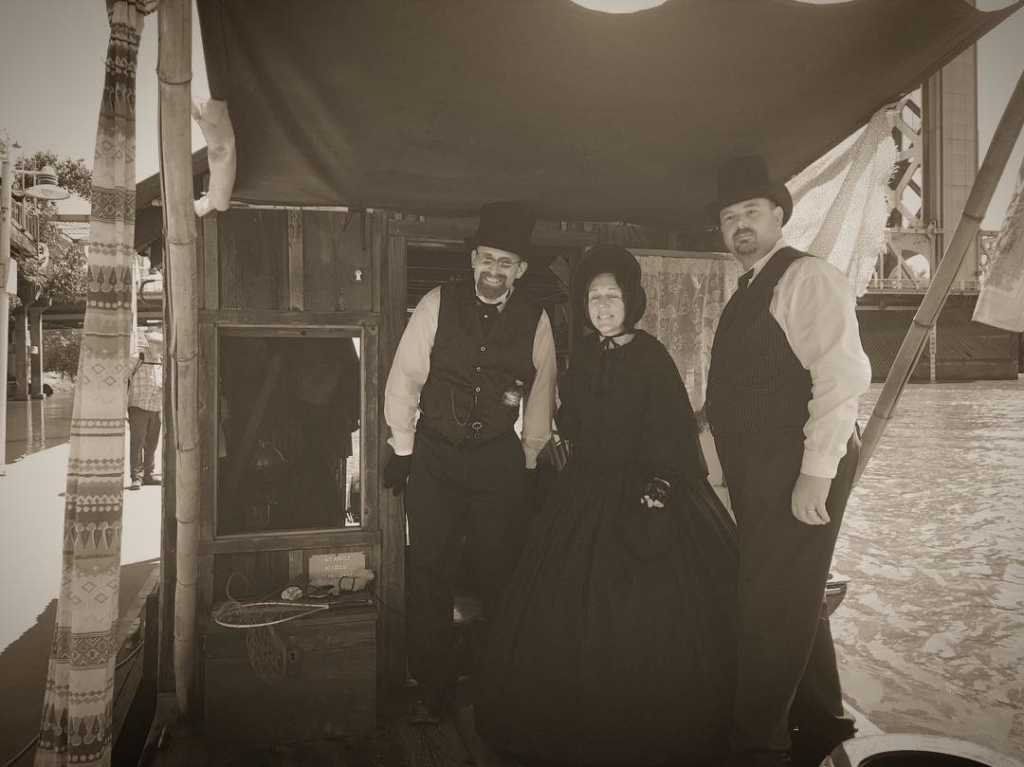 After four days in Sac, we said goodbye to our various new friends and headed on down river.

Next time, we explore the labyrinthian sloughs of the Sacramento-San Joaquin Delta.

Inside the Shantyboat through the Driftless Area

← Are We Going To Die on the Sacramento River?
The Mysteries of America’s Only Town Built By and For Chinese →

← Beautiful Places Between This and That ← The Mysteries of America’s Only Town Built By and For Chinese
Help! We need your support!