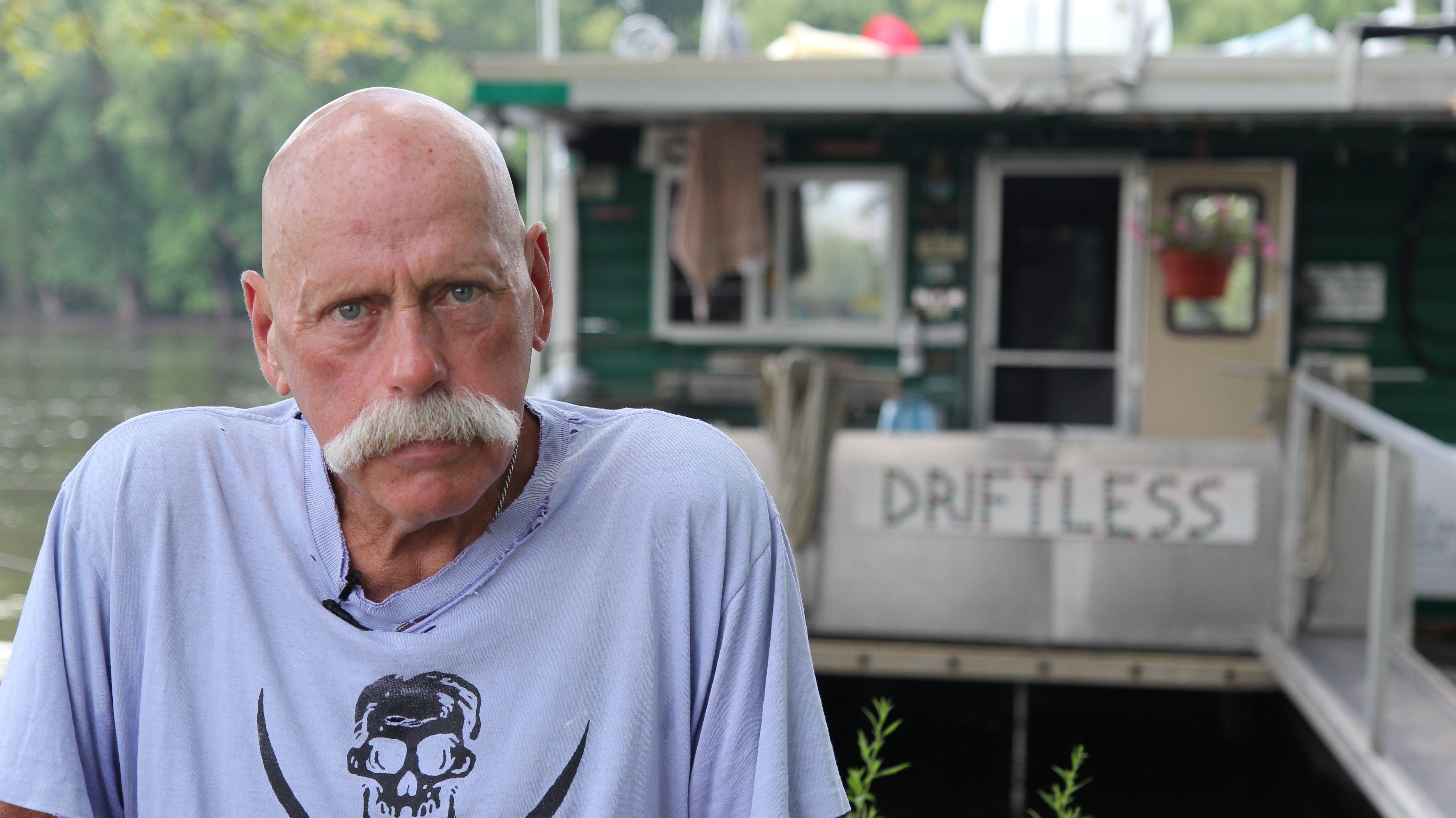 I just found out that the world has become poorer and less interesting. We lost Tim Mason who ran the world’s only floating shantyboat library aboard his shantyboat Driftless with his wife Sara.

You may remember that I interviewed Tim in the summer of 2015 in Marquette, Iowa. At the time I wrote:

Tim Mason is a man I’ve wanted to connect with since last year when we discovered each other’s passions for shantyboats, shantyboaters, and shantyboating. His beautiful houseboat Driftless formed the backdrop for our discussions about local and personal history. It is also the site of the world’s only floating shantyboat library. Tim and his wife Sarah were excellent hosts. Together we enjoyed conversation, swimming, and eating fresh river catfish. It was hard to leave their bubble of sweetness.

I’ll never forget that day, visiting Tim and Sara out on a remote island in the middle of the Mississippi River. The shantyboat Dotty was docked on the backside of St. Feriole Island in Prairie du Chien, Wisconsin and I had to take the newly acquired Johnboat and some sketchy directions across the wide river to their shantyboat Driftless beached on Island Number 172 near Marquette, Iowa.

Tim and Sara greeted me enthusiastically and offered me a beer (as you do in Wisconsin). Then we sat down for a long rambling interview for several hours covering Tim’s life, shantyboat history, local history, and the joys and terrors of living on a shantyboat. If I remember right, the camera either ran out of storage space or battery or both.

Then Tim gave me an extensive tour of the shantyboat library aboard Driftless, including numerous photos, articles, and artifacts. With much pomp and ceremony, he presented me with a certificate authorizing my membership in the National Association of Shantyboaters. (It is now hung proudly in the shantyboat Dotty).

It was steaming hot on an Iowa summer day, and it was time for a swim. I think there are photos somewhere of me plunging off the back of Driftless.

I hopped in my johnboat just as it was turning to dusk, and with no lights hoped I wouldn’t be run down by a barge.

Through the years, Tim sent me bits of shantyboat and river trivia, links to shantyboat resources, book recommendations, articles, and political rants about those who put profits over people. In other words, we were birds of a feather. I kinda saw him as a brother that I discovered late in life.

His obit sketches out some of the details of a beautiful life:

Timothy William Mason, 67, of Marquette, Iowa died Wednesday, September 12, 2018 at Mayo Clinic Health System in La Crosse, Wisconsin. Tim was born on October 8, 1950 in Prairie du Chien, Wisconsin, the son of Charles J. and Cecelia Margaret (O’Brien) Mason. He graduated from Mar-Mac High School and went on to attend college at both NIACC in Mason City, Iowa and the University of Iowa in Iowa City, Iowa.

In 1978, Tim married Debra Holl. To this union two daughters were born. The couple later divorced. Tim was united in marriage with Sara Proffitt in January of 1999 in Postville, Iowa. Together with Sara as his life partner, Tim enjoyed a simple and fulfilling life, living on their Shantyboat, “Driftless” during the summer months and traveling throughout the United States during the winter season. Tim had a profound love for his wife, daughters and grandchildren. Family was always a priority in life.

He was an avid reader, bird watcher, environmental activist, and had a love of history, especially for the river and indigenous people of Northeast Iowa. He had a true talent in storytelling and writing and also enjoyed cycling. Tim loved watching his grandchildren in all their activities, taking them on hikes, watching them splash in the river, traveling with them, and making them meals while camping. He was proud to teach acceptance and tolerance through his passionate view on politics. He was currently loving every snuggle he could get from his youngest granddaughter.

Tim’s love for Mother Earth is a gift to us all. As he would say “I could not remember a time in my life when I was not in or on the Mississippi River”. Tim was employed by the National Parks Service for many years as a Park Ranger and was very proud of working at the Wisconsin Department of Corrections as a sergeant. He retired in 2008.

The Gazette featured a nice article about Tim that captured his stubborn tenaciousness, environmentalism, and commitment to righting wrongs.

We can all only hope that people will be able to say similar things about us when we go: Tim had “this uncanny way, at his core, to not care what others thought of him.” He fought “for what was right and true without derailing due to social constraints.”

He “grew up in and on the Mississippi River and along the bluffs and valleys of the Driftless Region, will long be remembered as a hero by those who share his love of the unique landscape.” “Tim had a deep physical and spiritual affinity for the Driftless Region and the Mississippi River.” “He lived close to the wind and the birds.” “He never gave up. He wouldn’t take no for an answer. He made people listen.”

“He radiated natural energy that we all continue to feel.”

Here’s Tim in his own words about living on the Driftless:

Tim talking about his childhood and preservation efforts at Effigy National Park.

So the world is a good bit poorer without Tim Mason in it. His widow Sara told me she will be holding down and living aboard Driftless (and presumedly maintaining the shantyboat library) as long as she is able.

So let’s raise a glass to Tim Mason.

This River Life Drawing to a Close

Shantyboat on the Mississippi

River Tramps: The Strange Floating Population Found on the Ohio

Inside the Shantyboat through the Driftless Area

2 comments for “Honoring Tim Mason and the Floating Shantyboat Library”