We enjoyed Sacramento but were also relieved to be out of the city and out on our own. The city was fine, but we were largely confined to touristy Old Town. Sac is a big city and super spread out. For instance, the nearest decent market from Old Town was nearly three miles away. Downtown Sac is a food desert.

Before leaving town, we made one more stop to do a few interviews and so our new friend Mark Miller could take us around to a few places where we could restock. [Edit: As a longtime downtown resident, Mark notes that Midtown has a half dozen great farmer’s markets and the nearest decent market is only about a mile and a half away. Still a ways to walk from Old Town.] 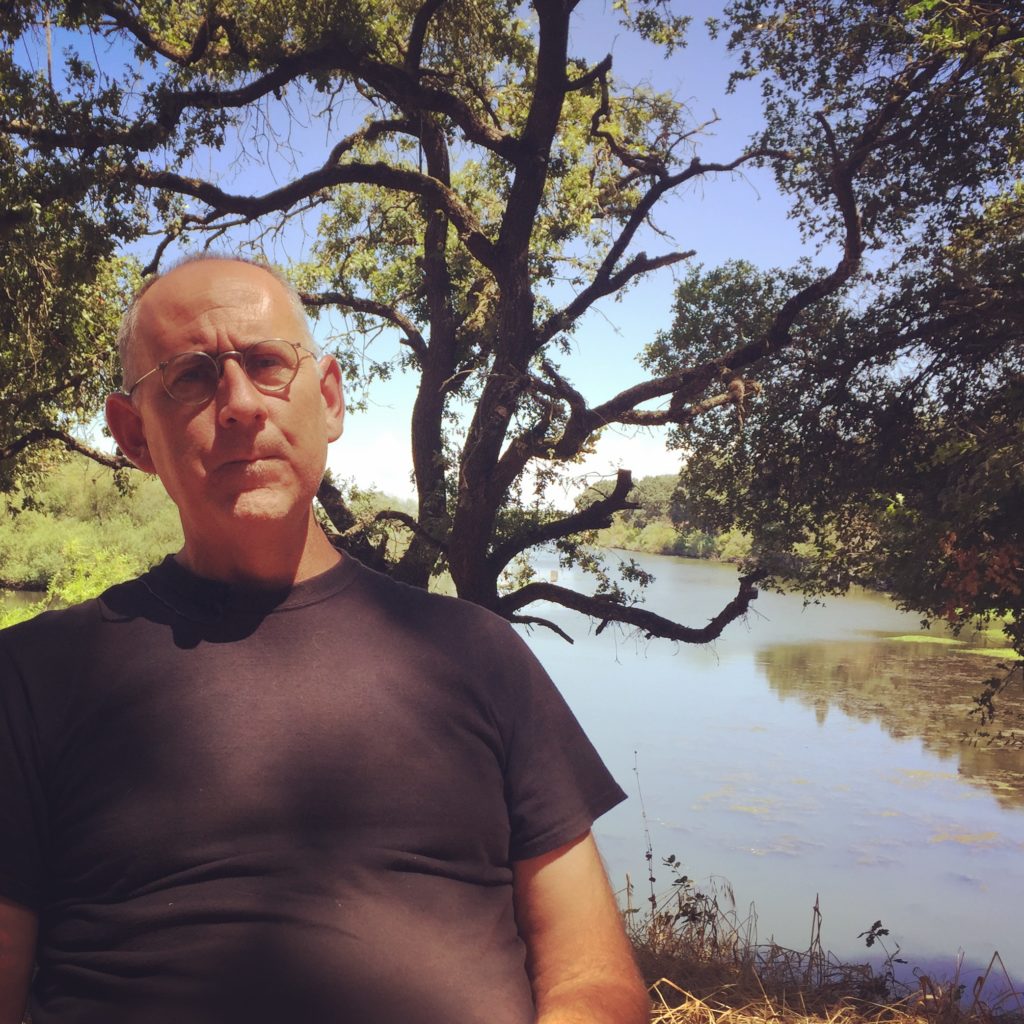 Mark Miller tells us about his Sacramento River memories

We stopped at the Sacramento Municipal Marina as we were headed downriver from Sac. We were charged an outrageous price to tie up for the night to an uncovered dock (not a slip) with no water and no electricity. We absolutely would have considered turning around and heading back up river to another marina if we weren’t so tired.

Still the next morning some grouchy lady leans down from the balcony of the swanky harbor master’s office and yells, “Hey! This isn’t a public dock! You can’t tie up there.” Turns out they’d misplaced out paperwork because we’d arrived kind of late. “Oh,” she said curtly. Apparently, we shouldn’t hold our breath for an apology. We were still grumbling about this days later, joking every time we docked, “Hey! You can’t tie up there!” 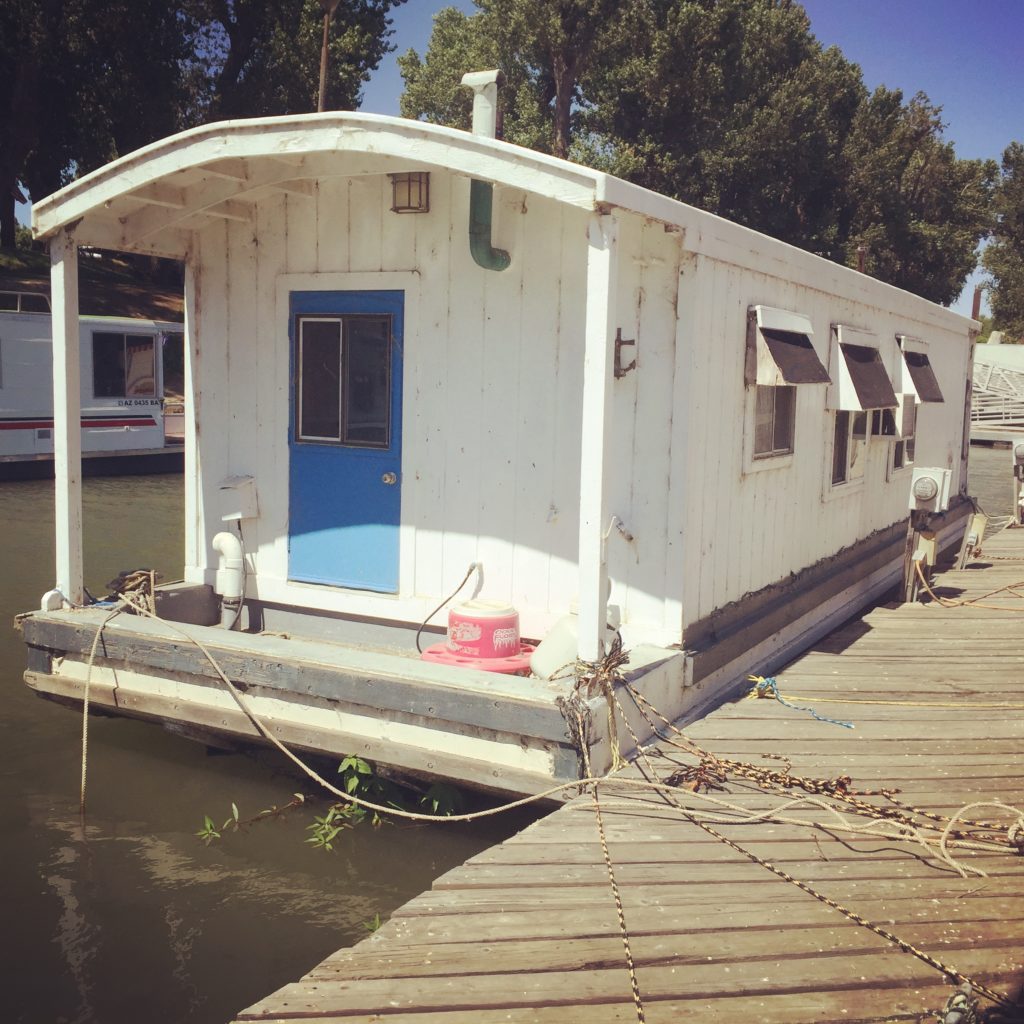 There were a good number of little marinas south of Sacramento that were little more than a few docks out in the river. Some looked posh, filled with big shiny yachts and others looked forgotten by time. We stopped at one of those and found a collection of old houseboats and a legitimate shantyboat. The people we talked to said they’d had their boat in the marina for nearly a decade.

Mark had given us a bunch of suggestions as we entered the Delta. Little towns like Courtland, Locke, Walnut Grove, and Isleton. It was getting late when we tucked ourselves off the river into Sutter Slough. Hazel was relieved to stretch her legs on land, but picked up no less than nine ticks in a few minutes. Were all the slough islands like this? We were horrified, but didn’t encounter the same thing elsewhere. 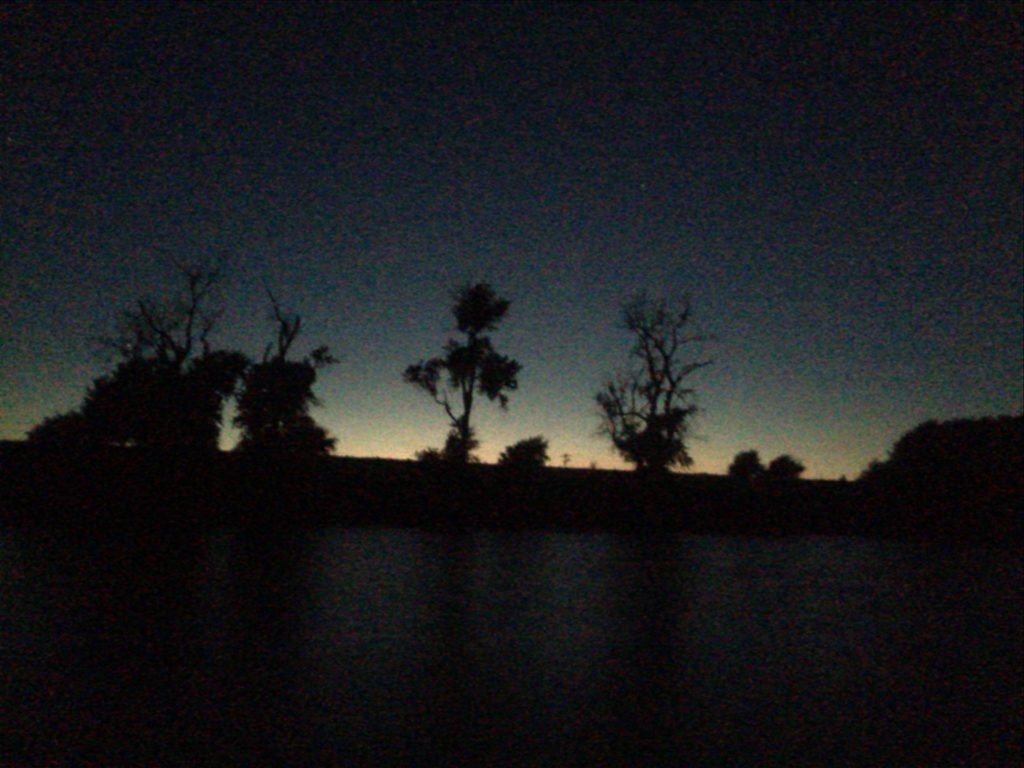 The sloughs immediately had such a different texture than the river. It was clear you were in a channel with rock revetment and high levees. A thin scrim of trees fringed the levee. At night it was ghostly and surreal.

The next morning we explored the sloughs a bit using our fancy NOAA charts to navigate. 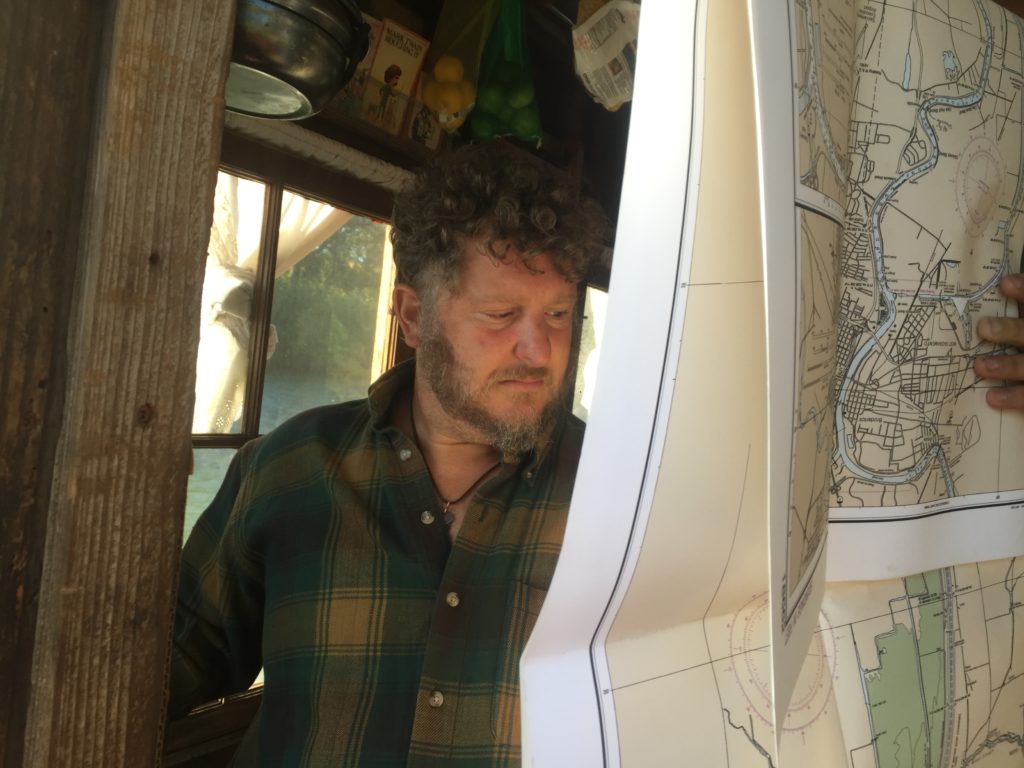 Not lost. Nope. Not at all.

We stopped for a swim and a walk along the levee where we discovered that the interior of the island was endless pear orchards. 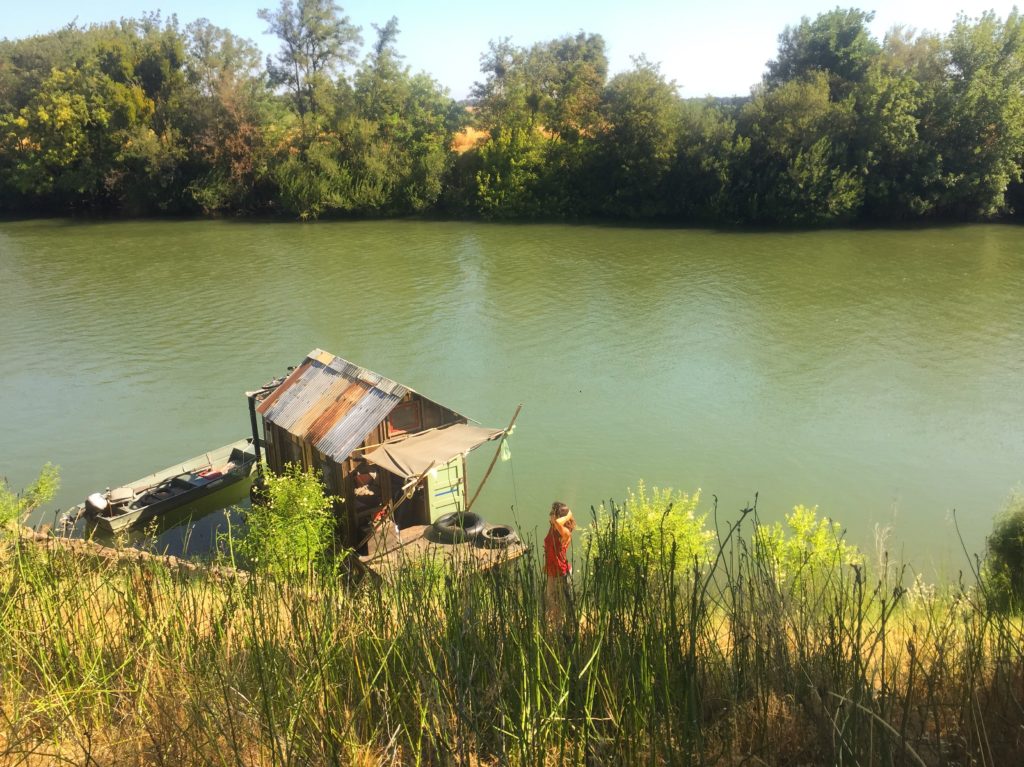 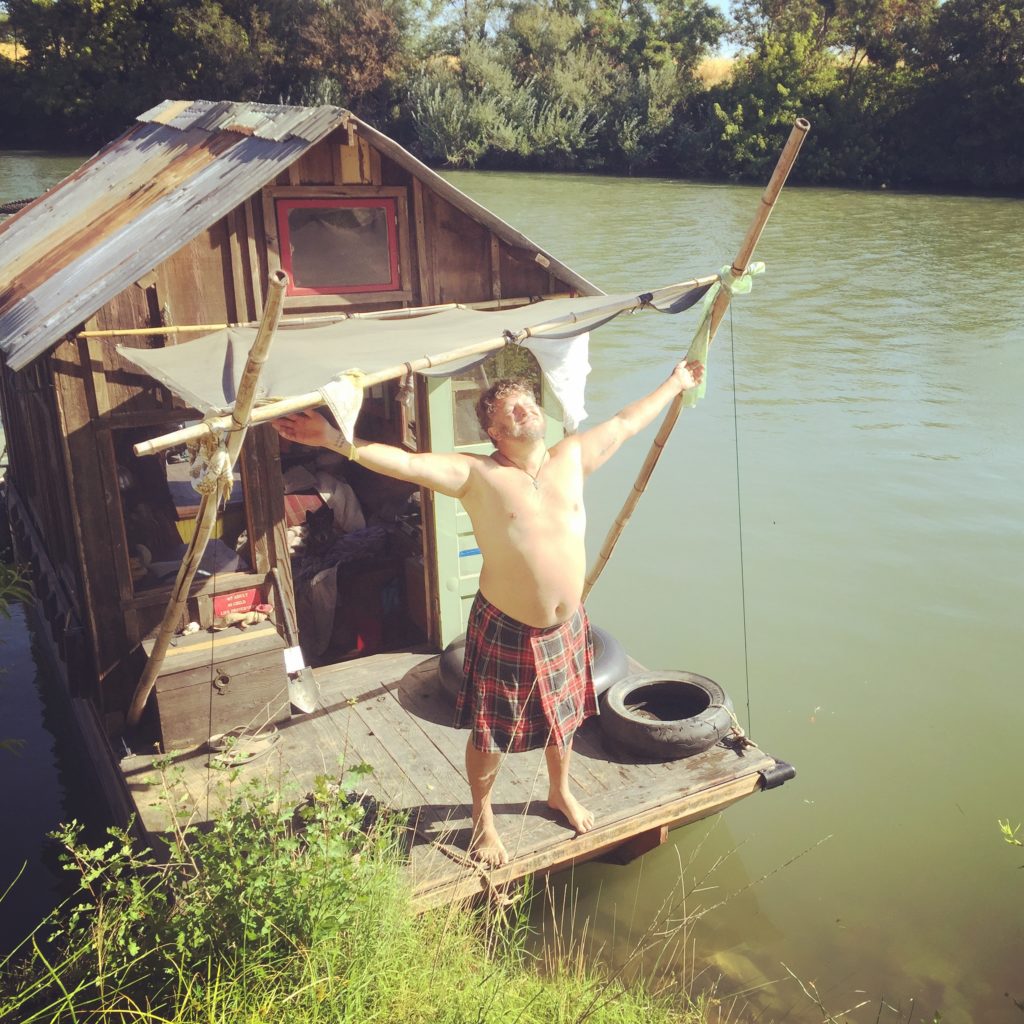 Nearby Courtland, in fact, is famous for their pears and was having that very weekend the Pair Fair. Naturally, we were obligated to pick a bag of pears as part of our research. 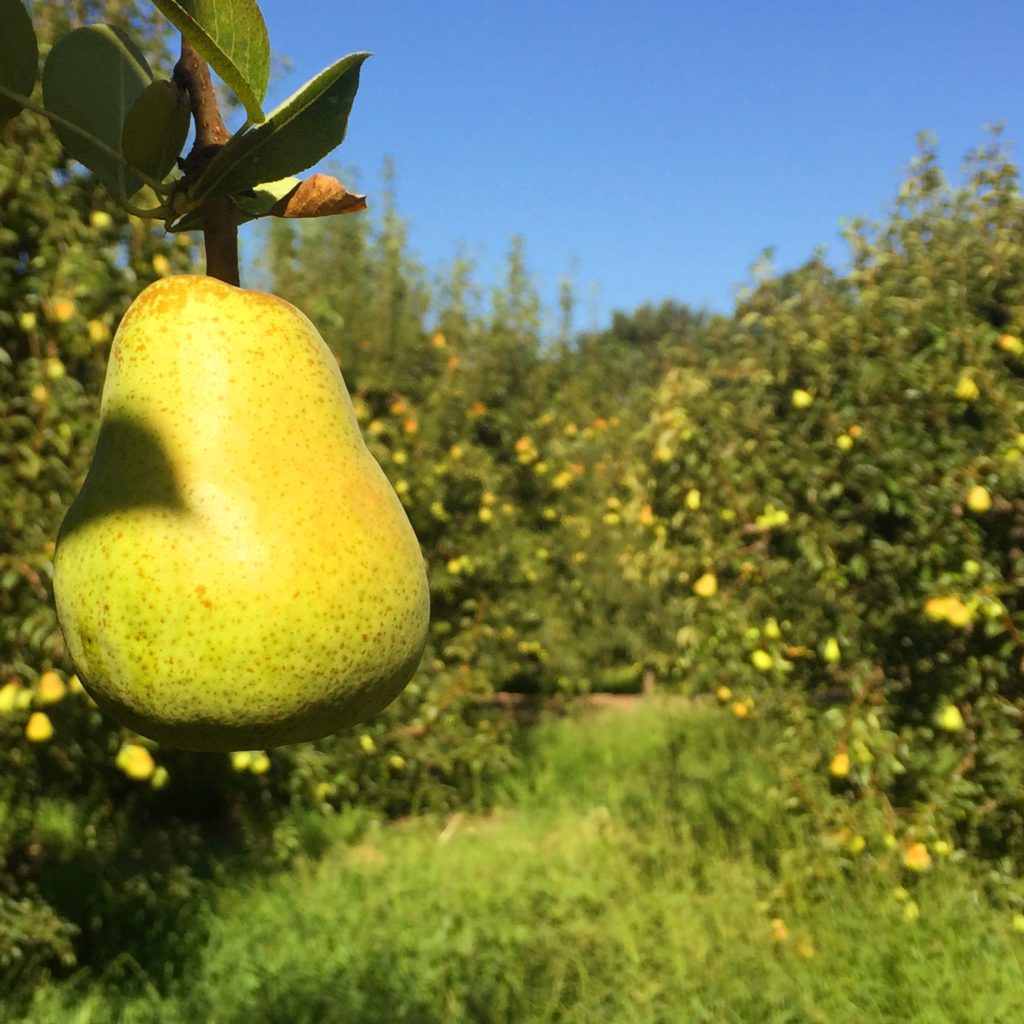 We headed to Courtland where every single spot on their public docks was occupied by small and large boats. We attempted a tricky beach landing between trees in a brisk breeze which was a total fail. I was piloting and Benzy was trying to fend off hazards and set an anchor and I managed to get the shantyboat in an awkward position followed by a piloting error which put a sizable branch right through our kitchen window pane. 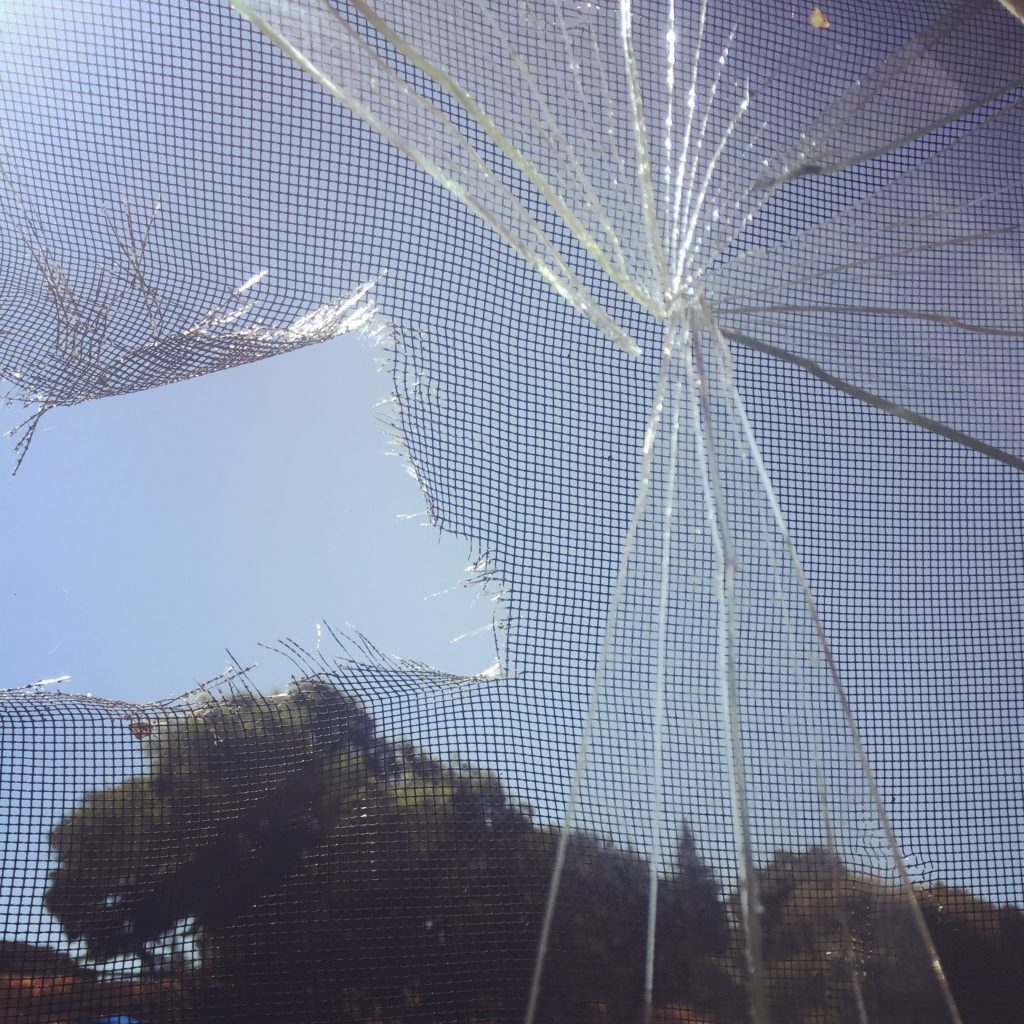 We gave up on Courtland and headed down river feeling stupid. Later I was grateful that it had not done more damage like taking out the window mullions.

We headed down toward Locke, our first stop on our delta tour. Mark had told us we had to meet several people in Locke and had told us about a slough behind the town that was dreamy and peaceful. But the bridge over the slough was a very short one, maybe only allowing boats 6 foot or less. The shantyboat is close to 9. The route through the sloughs around this particular bridge was something like 50 miles. Denied! And out on the river at Locke the only dockage was private and closed. Twice denied! 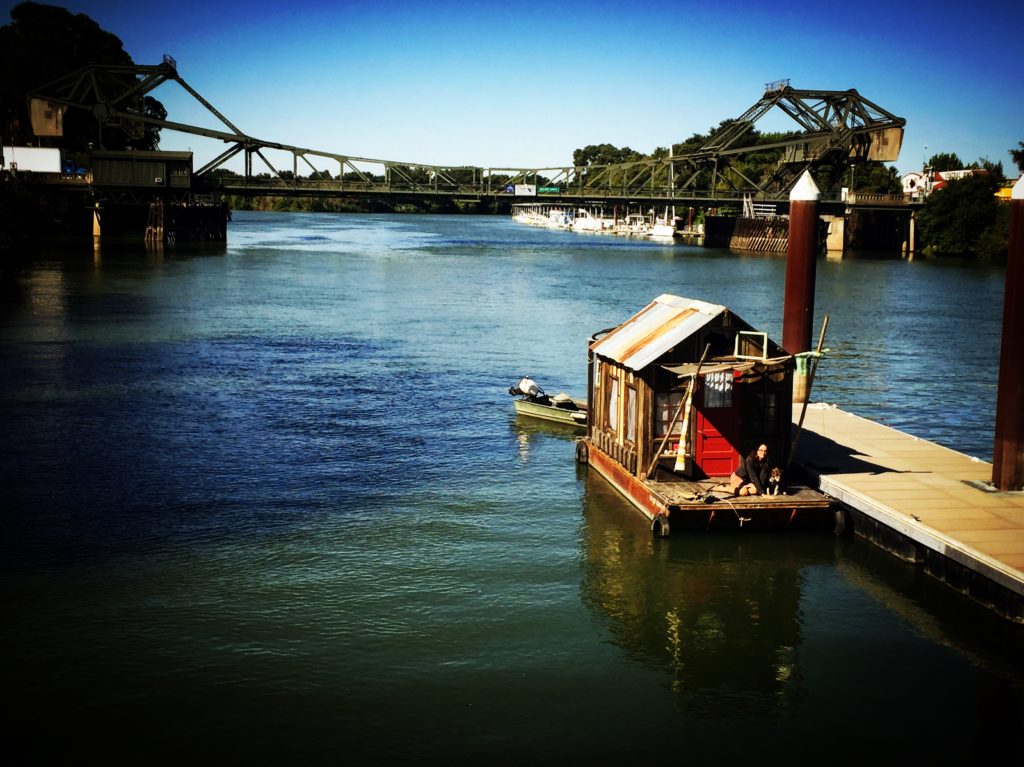 We continued on down to neighboring Walnut Grove and squatted the public dock there. Mark came down from Sac to meet us for lunch. He’s a professional old window restorer and immediately got to work on our window as well as ones that had been busted and covered for years. 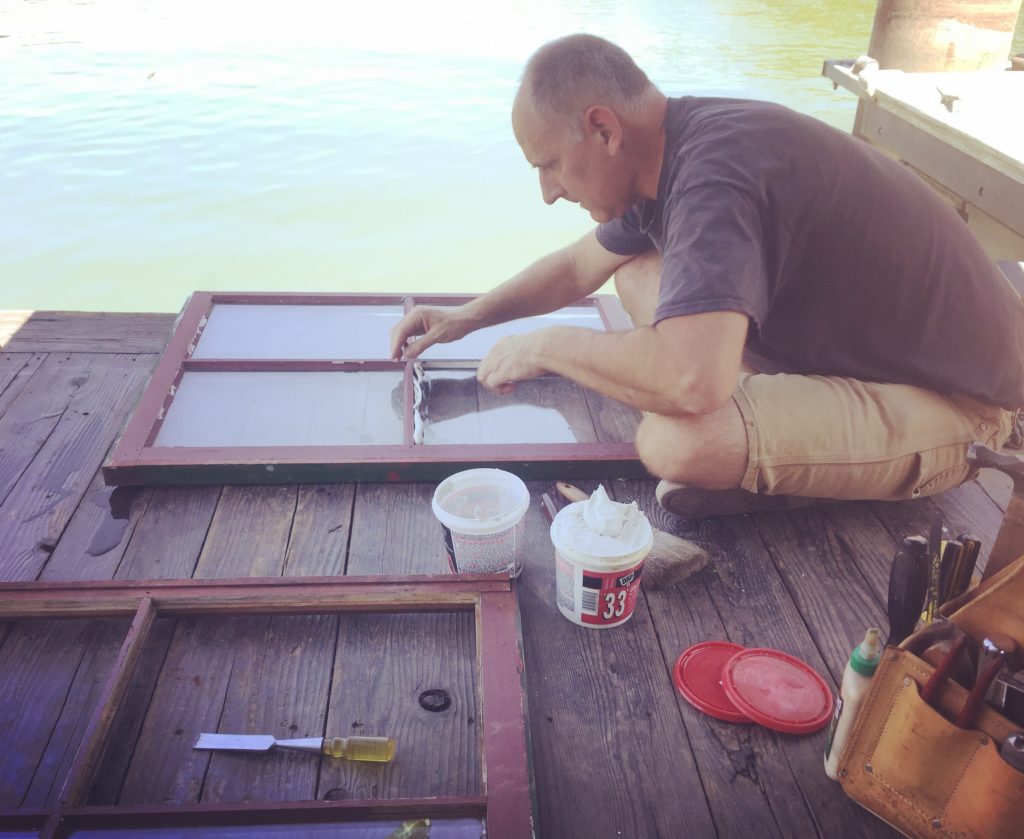 Mark drove us to nearby Locke, a tiny town founded by Chinese who had helped build the railroad then the delta levees and now worked as farm labor. This is a town that retains its original rustic character and Chinese influence. To be sure, it looks nearly identical to when it was built in 1915 due largely to a century of neglect and poverty, and later, a Byzantine net of historic preservation laws and cooperative and occasionally conflicting ownership. 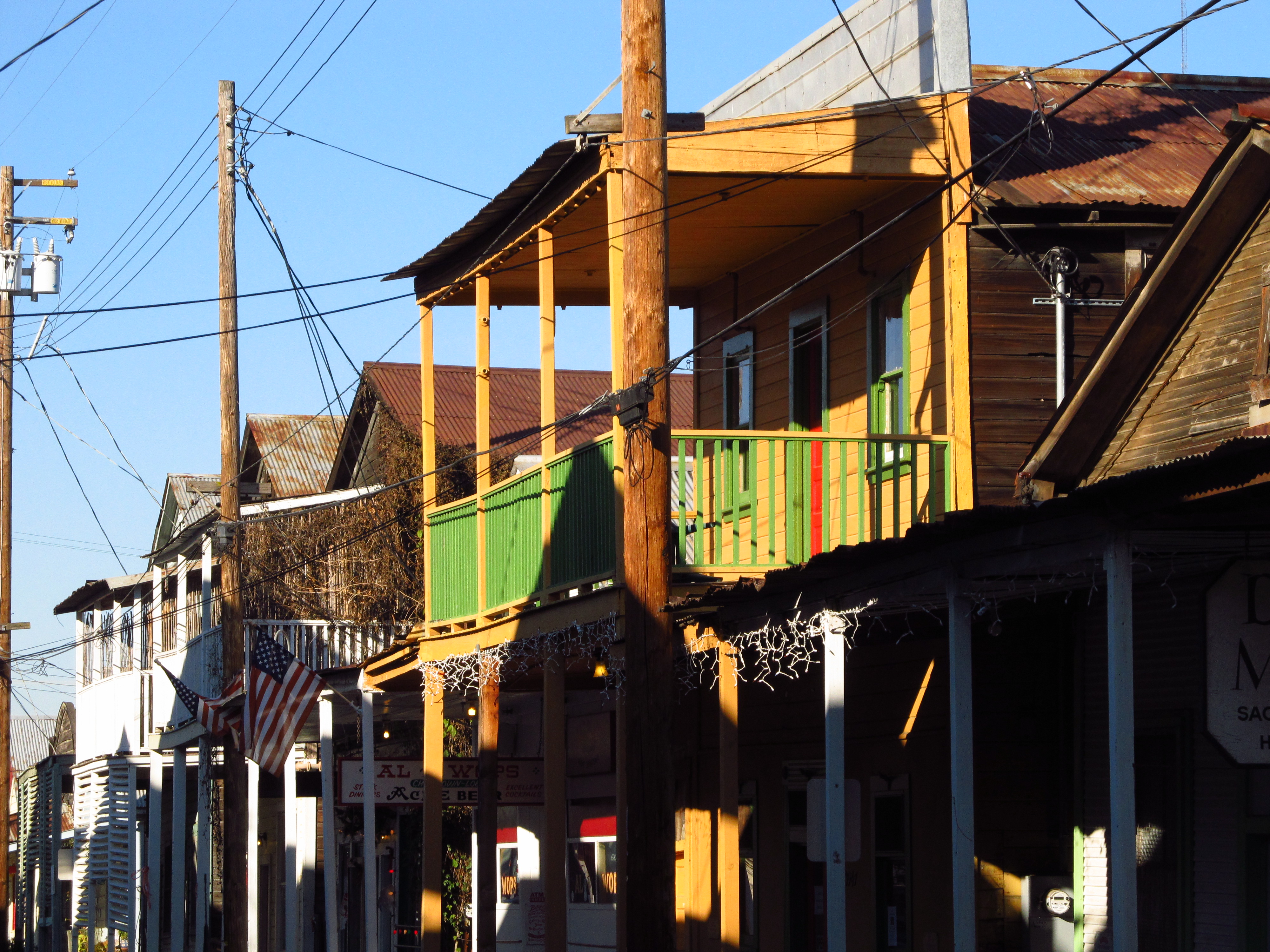 Mark introduced us to some folks in Locke, Russell Ooms who has lived in Locke off and on for 45 years, his wife Deborah, and James Motlow, a photographer and oral historian who wrote a beautiful book on Locke, featuring his portraits of residents and their stories in their own words. I interviewed both men who told me immense amounts of the town’s history.

I regret that I didn’t find a connection to interview someone from the Chinese-American community. I’m still hoping to make it up there sometime and talk to some folk. 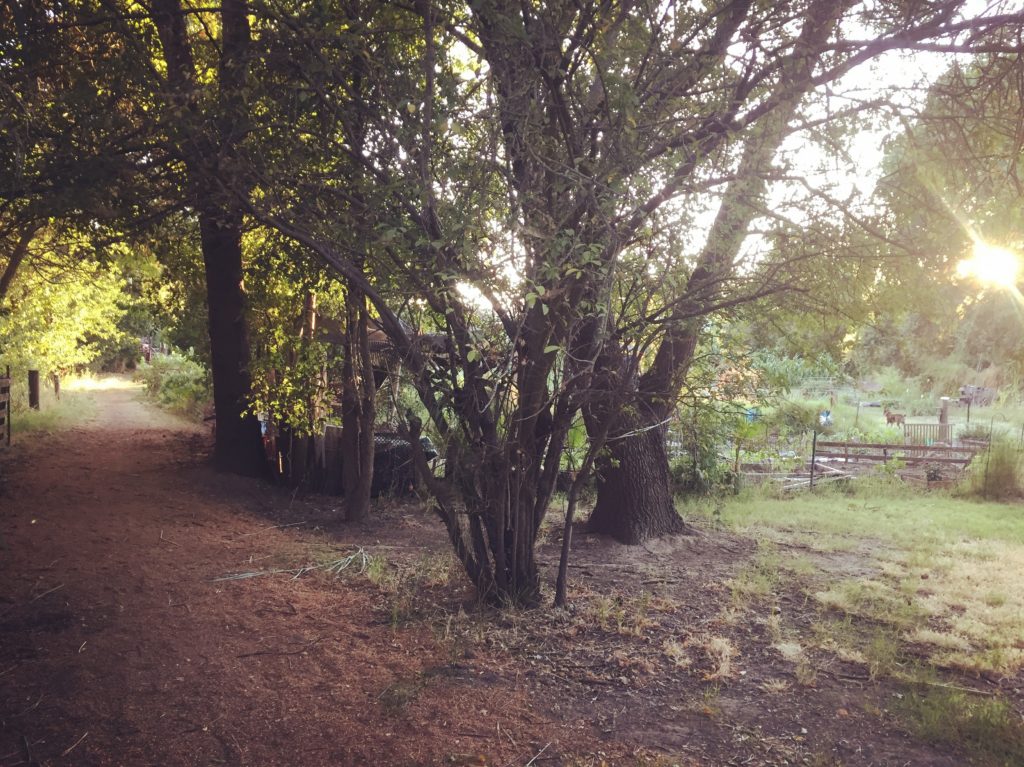 Due to the Chinese Exclusion Act of 1882, Chinese people could neither become citizens nor own land. So when a disastrous fire in Walnut Grove in 1915 spurred the Chinese to create their own community, they had to lease property from George Locke. Until recently, the people of Locke owned their houses, but no one owned their own property.

The one main street in town has at least two museums (one an unchanged gambling hall from the early 20th Century), a Chinese restaurant, a few artist’s studios, and a famed delta bar called Al the Wops (the only non-Chinese business opened in the 1930’s). 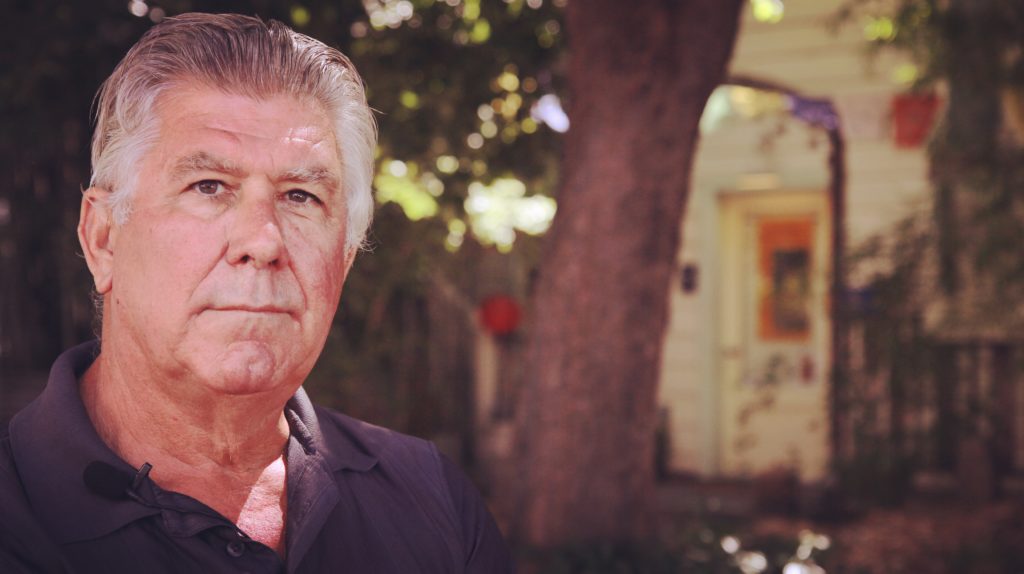 Back in the day, Locke was a haven for bootlegging, gambling and prostitution. An easy ride from Sacramento, it was where state politicians met to work out shady deals and let off steam. 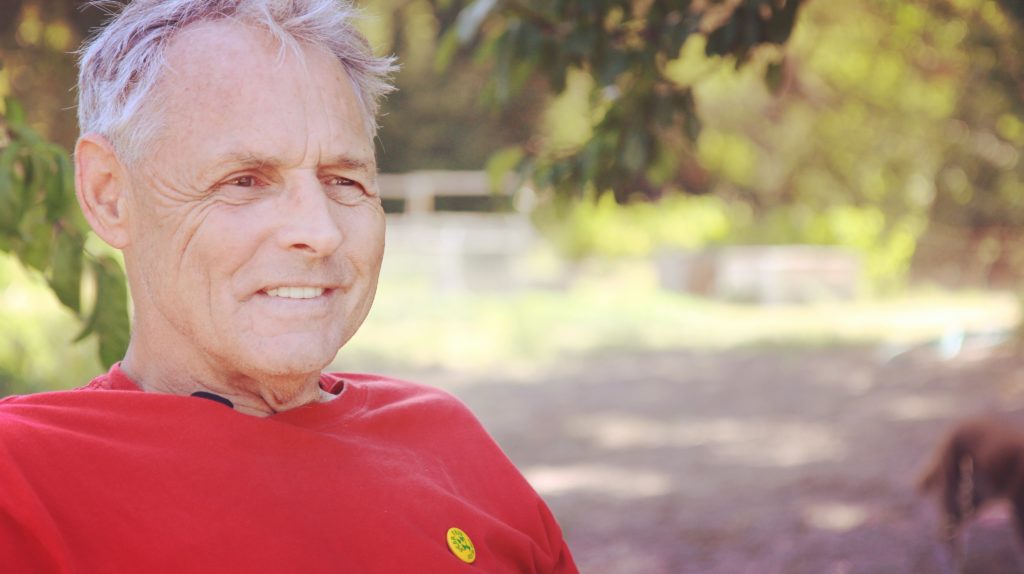 Russell Ooms reflected on his 45 year history in Locke

Behind Locke ran a slough that was variously called Railroad Cut, Dead End Slough, or simply Locke Slough. This is the Slough in which Mark suggested we camp. We were able to head out there by johnboat. It was gorgeous and did not disappoint. Russell told us that in the 70s, they’d have parties in which dozens of naked hippies would be skinny dipping in the slough. Mark and James told me that there used to be Italian families clustered in shanties and shantyboats on the slough. They were eventually removed by the Park Service. 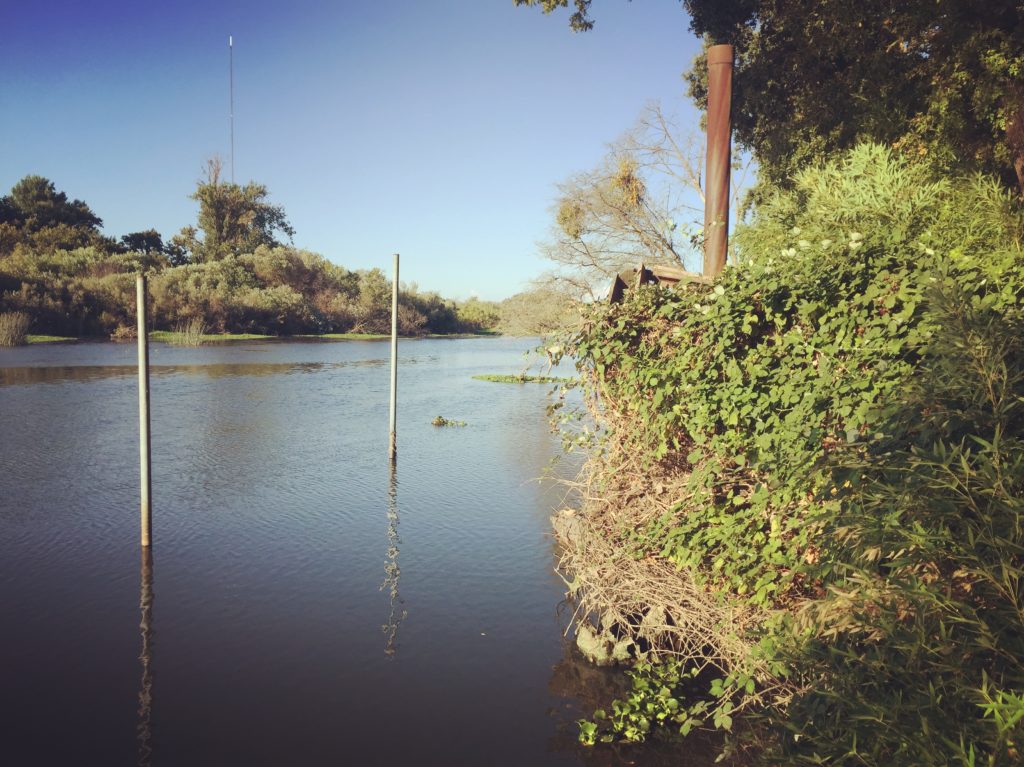 Just before we left Walnut Grove, we encountered the Sea Scout ship Compass Rose out of Sonoma. We were especially interested because Mark had told us that he’d served in the Sea Scouts as a kid and plied the waters of the delta. When you are in the Boy Scouts and get to high school, they allow you to become either an Eagle Scout or a Sea Scout. The Sea Scouts were co-ed so I suspect that helped decide it for him. He had hilarious stories of the old World War 2 ship and their skipper who was a hard-drinking Vietnam Vet. 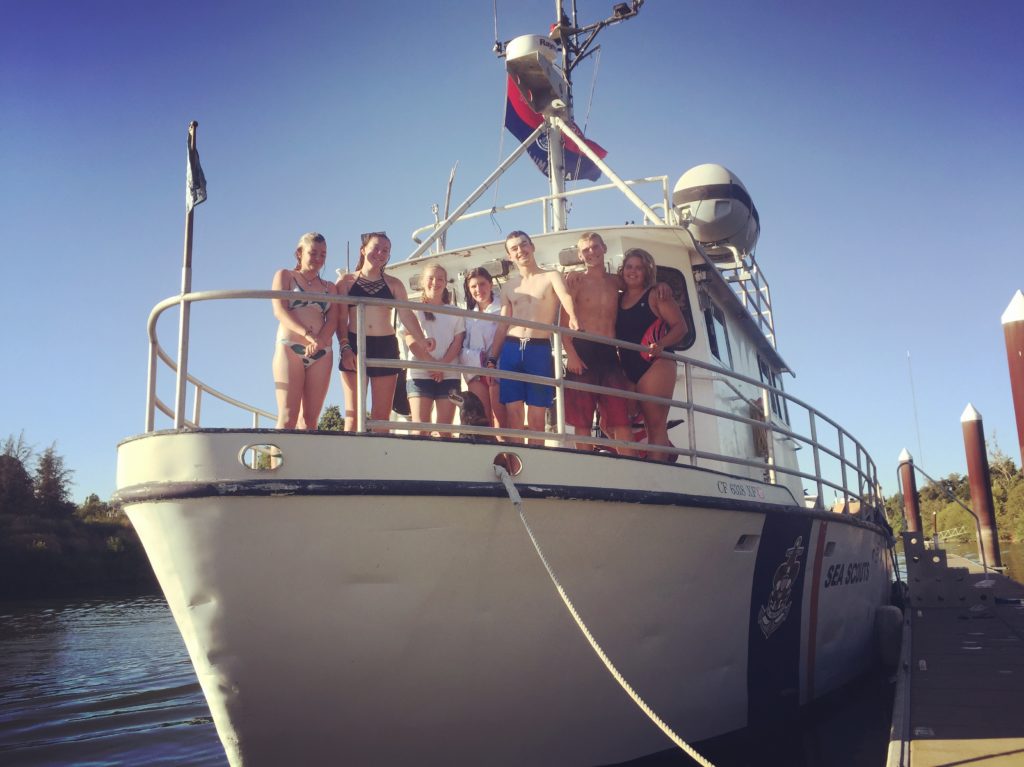 The mostly girl crew of the Sea Scout vessel Compass Rose who gave us a tour of the 60+ foot formal Naval ship.

The crew of the Compass Rose gave us a tour of their ship from the pilot house to the engine room. We felt a warm kinship to these kids and all the nautical traditions they were steeping in. 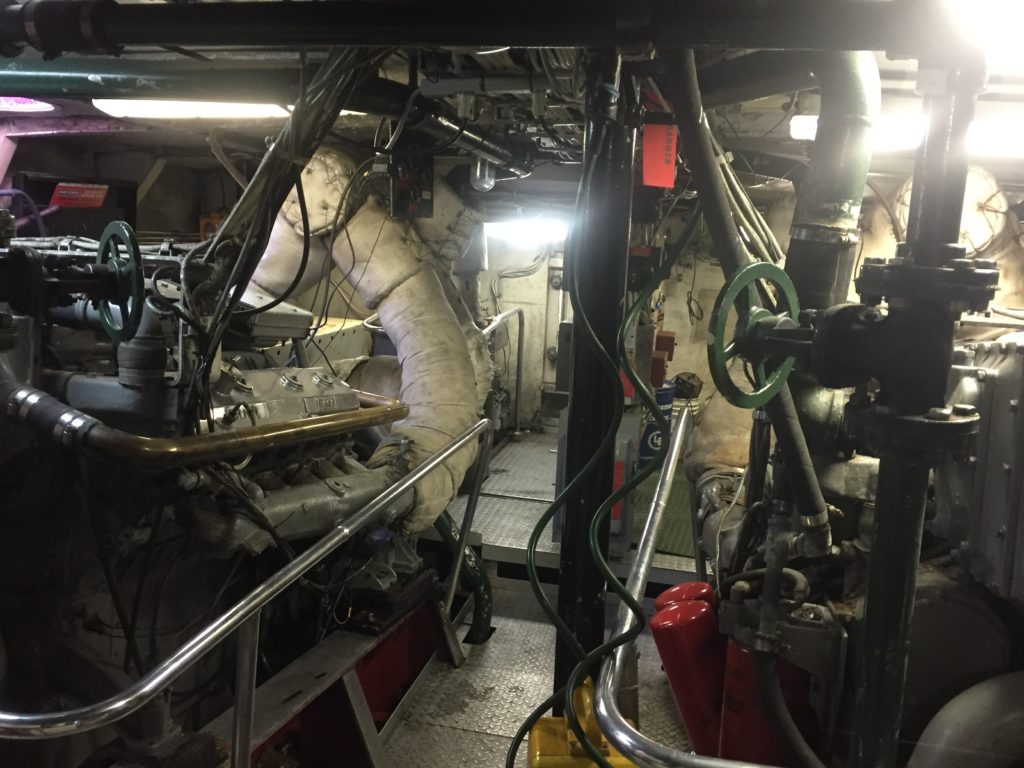 The sparkling engine room of the Compass Rose

Next time, travels in the delta slough maze.

Sunset on the Sacramento Delta [VIDEO]

A Collection of Photos from a Non-Shantyboat River Float

Are We Going To Die on the Sacramento River?