The Story of the Donboat

When we came from California we brought the Painted Pig, a small johnboat we bought in the Bay Area. It was small, but serviceable. Or so we thought. When we put it in the water at Winona, we found it was about as rigid as a pie tin and as stable as a top. With one person in it, the water line was a few scant inches from the gunnel and it flexed like a yogi. We agreed that if one of us was to meet our doom, the other would send the glorious fallen off in a flaming Viking funeral in the Painted Pig. 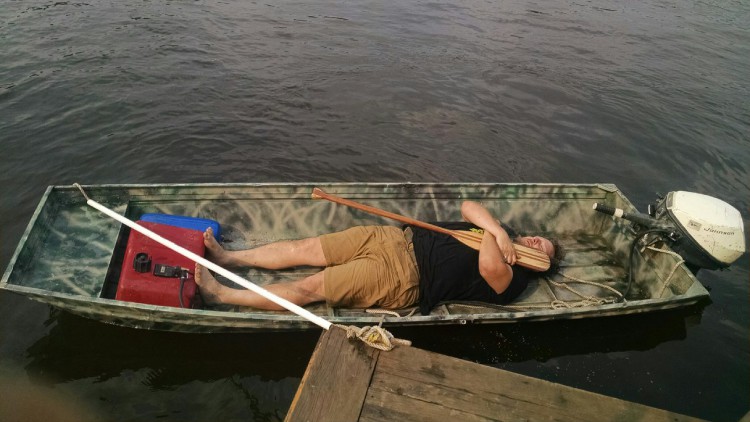 Wes practicing for his Viking funeral

We put Mr. Johnson on it but couldn’t get him started. So we took it over to Gerty who has magical motor touch. Gerty layed hands on Mr. Johnson and whispered quietly in his air intake, then got him started with one pull. He zipped around as deft as a water strider with the oversize engine. Gerty’s droll comment about the Painted Pig was, “Hmm, kinda squirley.” We asked him if he thought it was a good choice to take downriver. “You could,” he replied. We rephrased our question: “Would you?” Gerty’s answer: “Not me.”

Gerty’s Johnboat was a solid piece of work, 14 foot, with solid structural supports across the gunnels that served as seats, floatation, and storage. It was dead solid and you could easily stand up in it. We had total johnboat envy. Gerty mentioned that his neighbor had a Johnboat for sale. It wasn’t in great shape and was kinda big, but it was only 100 bucks. We looked at it, and it wasn’t bad. A few holes, yeah, pretty large at 16 feet, and once olive drab. 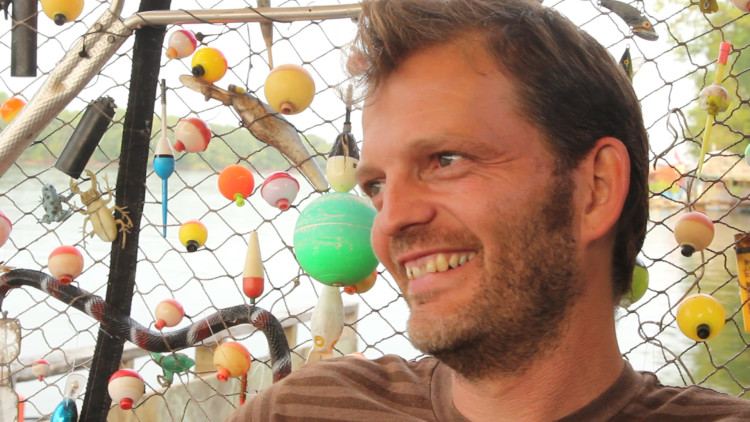 But we were pulling out of Winona the next day and Gerty couldn’t get ahold of the neighbor. He assured us, “Don’t worry. You can find boats downriver. Just ask around.” I had little doubts we’d find boats downriver, but serious doubts whether they’d be $100.

We had a bit more business in Winona and moored across the river at Levee Park while Jeremiah darted to the hardware store. A fellow came down to check out the shantyboat. He was a fella who worked sales in a tech company and wore a pollo shirt and his work ID on a lanyard. While I thought it unlikely I’d get any useful info, I thought I could start testing Gerty’s theory. So I asked him if he knew of any decent Johnboats for cheap. He didn’t have anything, or have any friends selling anything, but wait, he did think maybe he saw a johnboat sometime for sale along a road near the river not too far from the old railroad bridge in La Crosse. Okay.

We shoved off downriver making for La Crosse, 3 or 4 nav chart pages away. 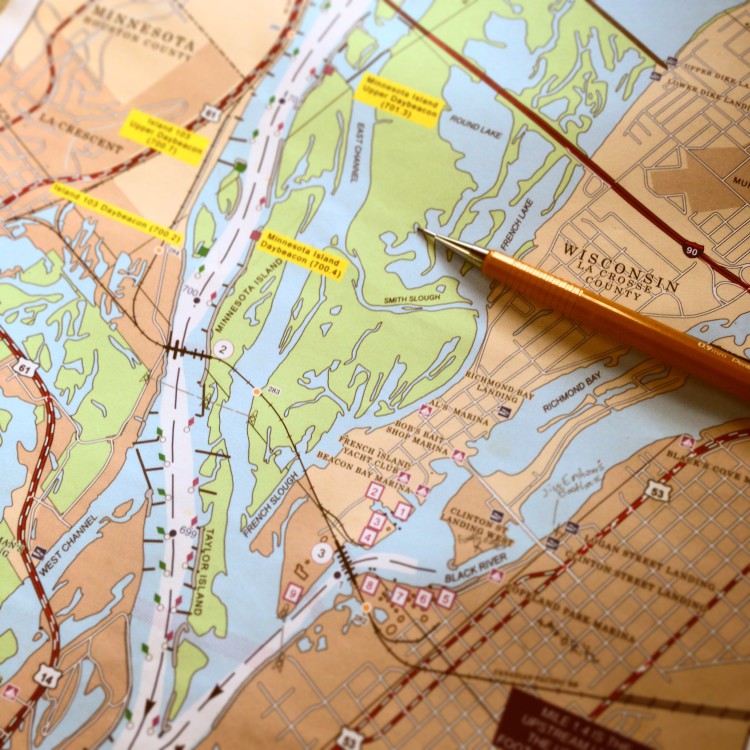 When we got to the swinging railroad bridge we started looking for a place to pull over. We didn’t think we would find the rumored johnboat but we knew we would definitely not find it if we didn’t at least try. We passed the bridge and saw a johnboat chained to a dock with a For Sale sign on a tree. Was this it? We pulled over and tied to a dock. Before we even finished tying up, we heard someone yelling at us. This turned out to be the one inhospitable person we ever met in Minnesota. He had no interest or curiosity about the shantyboat, and clearly viewed us as little more than water hobos, dirty pirates, here to spirit away his daughter.

Here was the next door neighbor up on his balcony shouting, “What are you doing?” It seemed perfectly obvious to us. Docking. We shouted back that we were looking for a johnboat. Well, that one’s not for sale (the sign was for the house). Do you know of one maybe on your road for sale, we asked. We heard there was one on the road near the bridge. “No, I don’t know of anything for sale. There’s nothing around here.” Maybe we could ask the neighbors, we suggested. Boaty people often know where boats are for sale. “They don’t have anything for sale either. I’m a boat person,” he said indignantly, “I have five boats. I go out at least once a day, sometimes more than once. And I don’t know of anything for sale. You better not come up on people’s personal property or you’re gonna get hurt,” he added threateningly.

I was thinking of giving up, but felt I might regret it. We decided to go upstream of the bridge away from this asshole and look for a place to moor or beach and then at least give the road a quick walk.

Just upstream of the railroad bridge, we couldn’t see an easy place to moor. The bank looked inhospitable and the upstream beach was littered with jagged concrete. About then our fuel tank ran out. In the switch to the new one, the motor cut out and we were adrift. I immediately cast the anchor but the wind was blowing us to the bank. We dropped the bumpers and came to a soft bump against the shore and tied off. Okay, that’s done, I guess.

Jeremiah suggested that Hazel and I walk along the road. I felt awkward walking through someone’s property but couldn’t find a property line or a path. There were vacation homes nestled between legit and beautiful houses. Eventually we found a driveway and walked to the road. 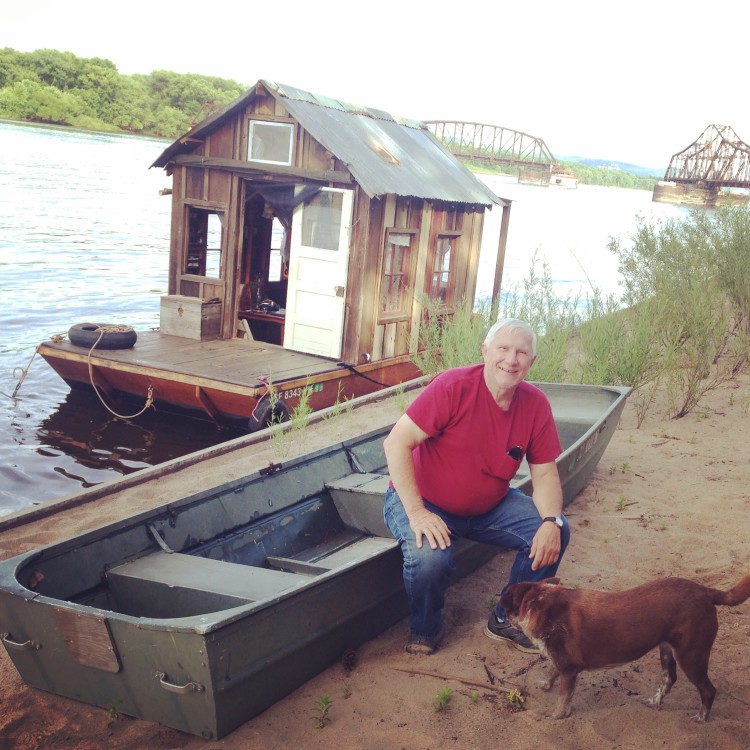 There sitting at the edge of the driveway was a beautiful johnboat with a For Sale sign on it.

I immediately called the number and explained how we came to be there. “You’re moored in front of my house? Cool.” the fellow whose name was Don said. We negotiated a very fair price over the phone. “I’ll be there in 10 minutes,” he said and was there in five. I told him right away I didn’t have cash, but did have a check or if he preferred he could take me to an ATM. He asked, “Is the check good?” I said, of course. He said, “Fine. If you ask someone if their check is good and they get mad, the check isn’t good.”

We talked with Don for at least an hour about the history of that stretch of river, about the property that’d been in his family since 1917, the original vacation cabins his grandfather built from a boathouse, his beautiful house he built in the 90s, the hundred year flood and how high the water had come up, the catfish that lay in wait for fishermen in the deep hole at his front door, how the barges tore up his shoreline trying to line up for the railroad bridge, and finally how the Army Corps of Engineers had fixed his shoreline by sinking two barges in his front yard and filling them with sand. 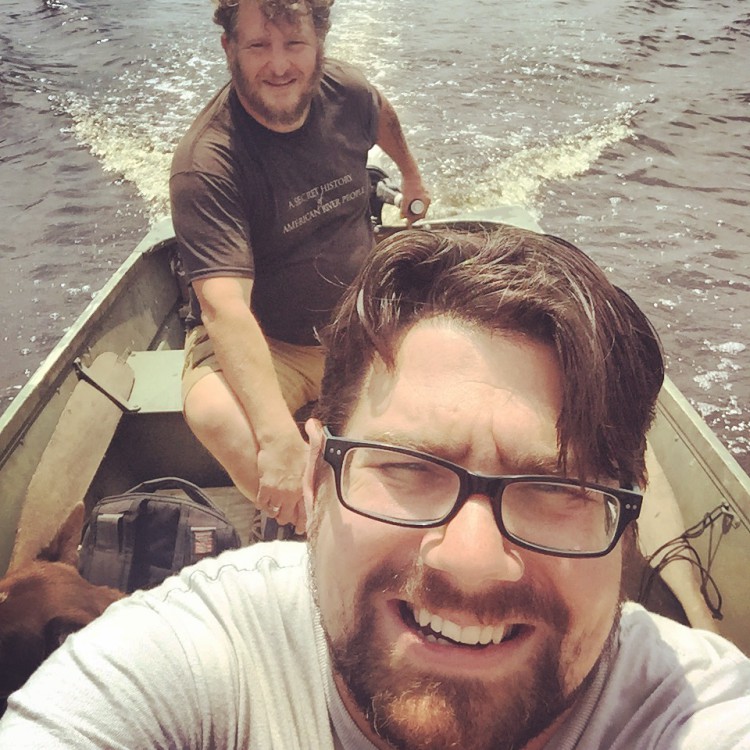 For just a little bit more than the one on Latsch Island, we got a beautiful 14 foot johnboat. With paddles. And title. We decided to call it the Donboat. Dead stable, beefy transom, beautiful olive drab, and registered in Minnesota (unlike Dotty) in 2007. We loved it. Mr. Johnson loved it too.

In Brownsville, we took off on an afternoon expedition across the channel and into the network of islands. We found a shady and peaceful place to play banjo and guitar and smoke a cigar and read books and marvel at the beauty of the river.

Jim Ehrsam and Other People Not Interviewed

The Secret History Shantyboat is Afloat

Louise and the Winona Backwaters

Hazel on the River

← Louise and the Winona Backwaters ← Fellow Workers
Help! We need your support!