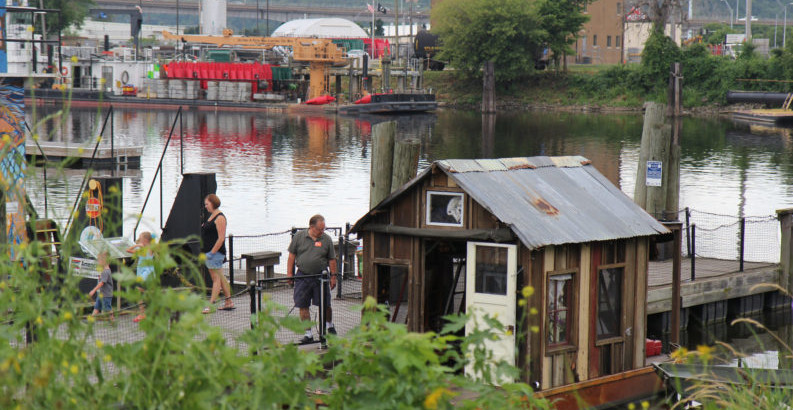 Knoxville Mercury: Artist to Launch in Knoxville, Collect Stories of ‘River People’ along the Tennessee

Over the past couple of years California-based artist Wes Modes has been piloting his 1940’s shanty boat up and down U.S. waterways with one expressed purpose: to collect and archive the stories of those he has dubbed “river people,” the eclectic cast of folks, like scientists, historians, other shanty boaters, and locals living along side or making a living off the these interconnected tentacles of water.

In 2014 and 2015 he piloted a huge section of the upper Mississippi River, motoring 680 miles over four months along the state line between Wisconsin and Minnesota, Iowa and Illinois, collecting more than 50 oral stories from the North. This summer, he hopes to turn his outboard motor to another waterway in another part of the country: the Tennessee River, which he plans to follow out to the Great Mississippi through Tennessee, Alabama, and Mississippi, chronicling stories along the way.

But first, Modes needs to raise the money to get here. He’s hoping to crowdsource just $5,580 before May 31 to cover costs of transporting his boat to Knoxville, where he plans to launch this leg of his journey. He says every little bit helps, figuring a $5 donation gets him about 20 miles closer to his goal. He’s also offering a few perks, such as t-shirts and post cards, for those willing to chip in.

Modes, of Santa Cruz, started constructing his “shanty boat” back in 2012 with this mission in mind. He calls his humble abode “cozy yet comfortable.” The small ramshackle house boat has a full kitchen, a loft bed, a “comfortable” couch, and a library full of stories, in books and others recorded along the river ways.

You can donate to Modes Kickstarter, if you so choose, right here and learn more about his work on his website, peoplesriverhistory.us. He’s already at about 20 percent of his fundraising goal.

Knoxville Mercury: Shanty Dreams: A Quest for the Forgotten Stories of the Tennessee River

Reddit: I am an artist spending the summer in a shantyboat on the Mississippi River gathering stories of river people. AMA!