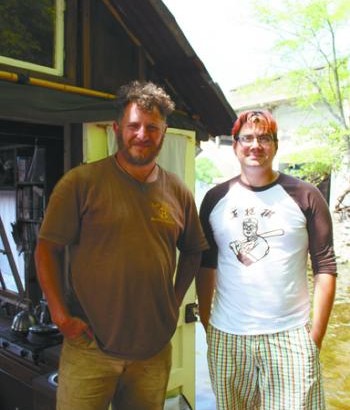 It is August on Latsch Island, that beautiful time of year when everything moves a little slower, from the water that laps up the sides of boathouses, to the mellow hum of nearby cicadas. Inside a small shanty boat anchored off a sandy plot of land beside the Wagon Bridge, two people sit relaxed at a table, sipping hot coffee and enjoying the few savory moments of leisure before continuing their journey on the Mississippi River to discover the stories for a larger anthology of American river culture.

The journey, which is officially titled “A Secret History of American River People,” is the Master’s of Fine Arts project of California native and University of California–Santa Cruz graduate student Wes Modes, who is traveling down the Mississippi River with his two human assistants, Kai Dalgleish and Jeremiah Daniels, and his dog, Hazel. Together, the group has made the journey down river to collect stories and interviews for an audio and video archive of people living on or adjacent to a river. “[The project is] based on meeting people and [listening to] their stories,” Modes explained. “My intention is to collect video and audio [interviews] to become part of a larger archive for archivists to learn about river people throughout history and where they are now.”

Although Winona marks the midpoint of their trip, which started in Minneapolis two weeks ago, the project was conceived over two years ago when Modes put the idea on Kickstarter, an online funding platform. “I remember when he put [his idea] on Kickstarter,” recalled Daniels. “I was like, ‘do you really think people are going to give you money to do this?’”

Modes, too, was skeptical at first. “Honestly, I was surprised the project got as much support [as it did],” he said. “We got support from all over — Wisconsin, Indiana, Washington, West Virginia, small towns in California that I had never heard of. But people think that this work is important.”

For Modes, the history of life on the river is a very American, a unique story that not only navigates the experiences of river people over the years, but also demonstrates the changing culture and climate of American cities. “The Mississippi is unique in that towns along the river are still river towns,” he said. “Other places have forsaken the river, but towns on the upper Mississippi haven’t completely forgotten the river, and I appreciate that.”

By his account Modes has interviewed around 10 people so far, including a tugboat driver, an avid fisherman, a director of a small town river museum and a retired labor historian. “The people I have found are just really passionate about the river,” he said of his subjects. “Every single interview has been totally interesting to me. People are more passionate about the river than I would have ever guessed.”

Because of the varying perspectives and accounts of his subjects, which he also hopes to expand to other rivers throughout the country, Modes expects that his archive will be a broad history of river life that people can access and explore in what ever way they want. “I don’t see this being about a single [river-related] subject,” he said. “It will be a multitude of work with a variety of paths.”

While the group had originally planned to make the Quad Cities area the end point to their journey this summer, Modes said that he isn’t quite sure exactly where they will end up now because of all the little stops they have made along the way. “I’m not sure how far we’ll get in [two-and-a-half weeks] time; we’ve more or less been stopping in any little town if it has a connection to the river,” he said, listing off a few of the places that he has already checked off of his list. “Wabasha, Lake City, Alma.”

Along the way they have met hundreds of people, most of whom are curious about the 20-foot by eight-foot shanty boat, which the group crafted entirely by hand from fiberglass, recycled wood and other materials. Essential items like a Johnson Motor — lovingly referred to as “Mr. Johnson” — and safety gear were donated by family members or salvaged from various places such as a local barnyard and chicken coop. In total, the construction of the boat took two years, in between working day jobs and attending class. So far, everything has worked out well. “The boat has been super solid,” Modes said. “It has floated perfectly and beautifully.”

Like any other house, Modes, Daniels, Dalgleish and Hazel have made the shanty boat into their own personal space, putting homey touches here and there. To one side there is a library full of books on maritime and river travels, while another small yet cozy area has a table with a couple of chairs and a dog bed below. A banjo and guitar hang on the wall next to the sliver of a bathroom (allowing each person to hold onto a bit of privacy), and there are photographs and drawings that cover the wooden walls like makeshift wallpaper. “It was important for me to have art that reflects where I’m from,” Modes explained, propping his bare feet up on a nearby chair.

Much like the pictures and papers that Modes has brought with him on his journey to remind him of home, he hopes the stories and interviews he is collecting will serve as a way for people with connections to the Mississippi River to be reminded of their history and reflect on an important aspect of Americana.

If you would like to learn more about A Secret History of American River People or share your own river history, visit peoplesriverhistory.us.

← Into the Storm on the Open River
Charming La Crosse, Wisconsin and a Theory About the Uneven Distribution of Social Capital →