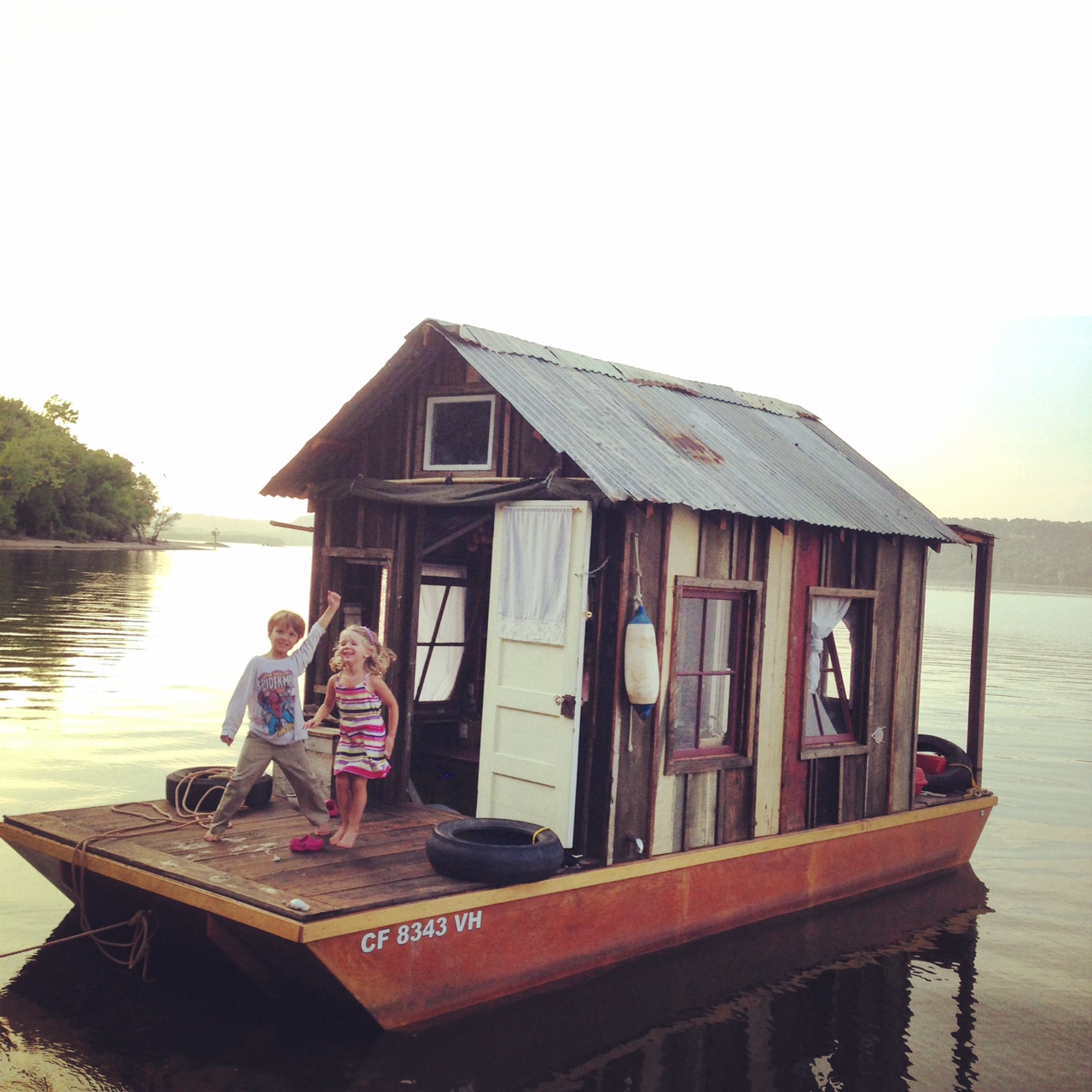 We headed into Lake Pepin which as everyone predicted was beautiful. Boat traffic was minimal once we got out of the narrow channel and the lake opened up to gorgeous vistas. Densely tree-lined banks punctuated by dramatic bluffs, all under an ominously cloudy skies. 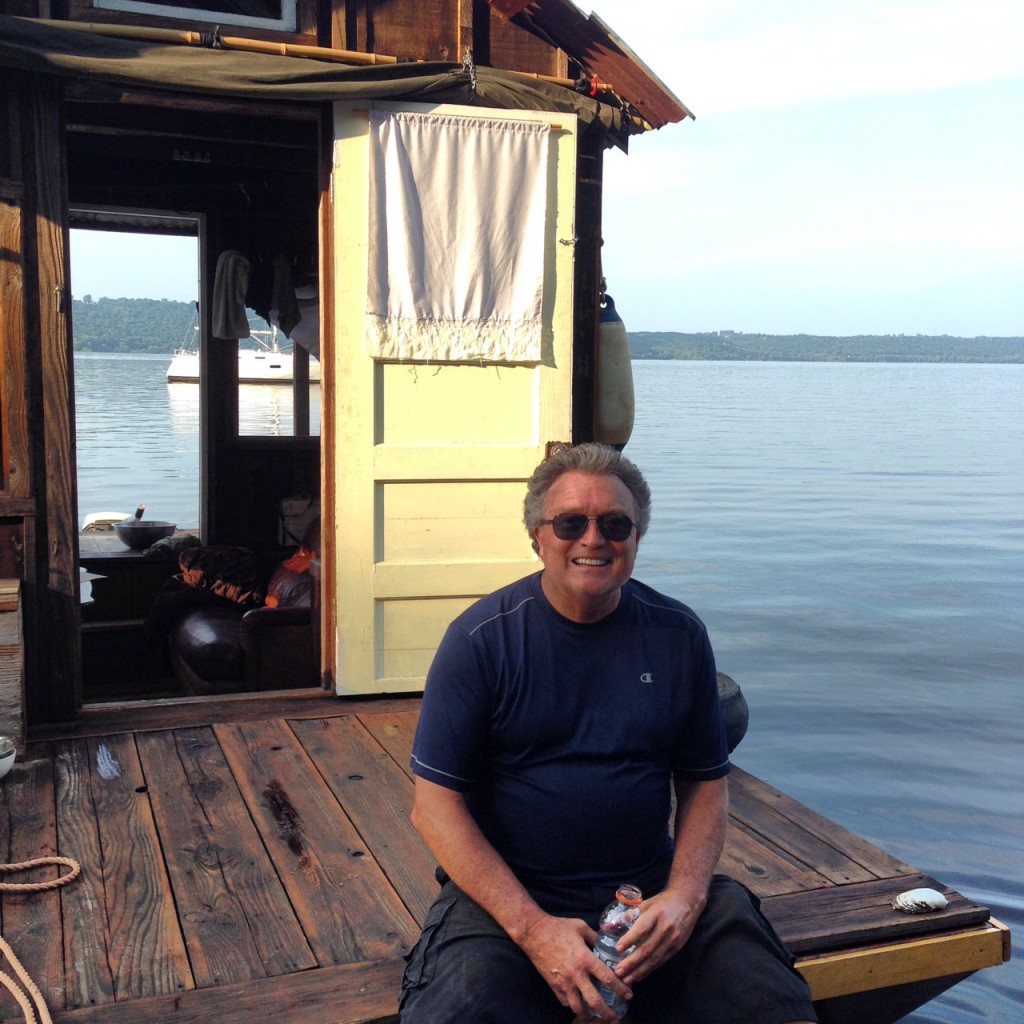 As we made our way down the lake, we were overtaken by a man on a JetSki. The fella introduced himself as Mike and told us that Mike Mosedale had let him know that we might be headed downriver past him. He had stolen his neighbors JetSki to run us down. He invited us to dinner and wine with his family. 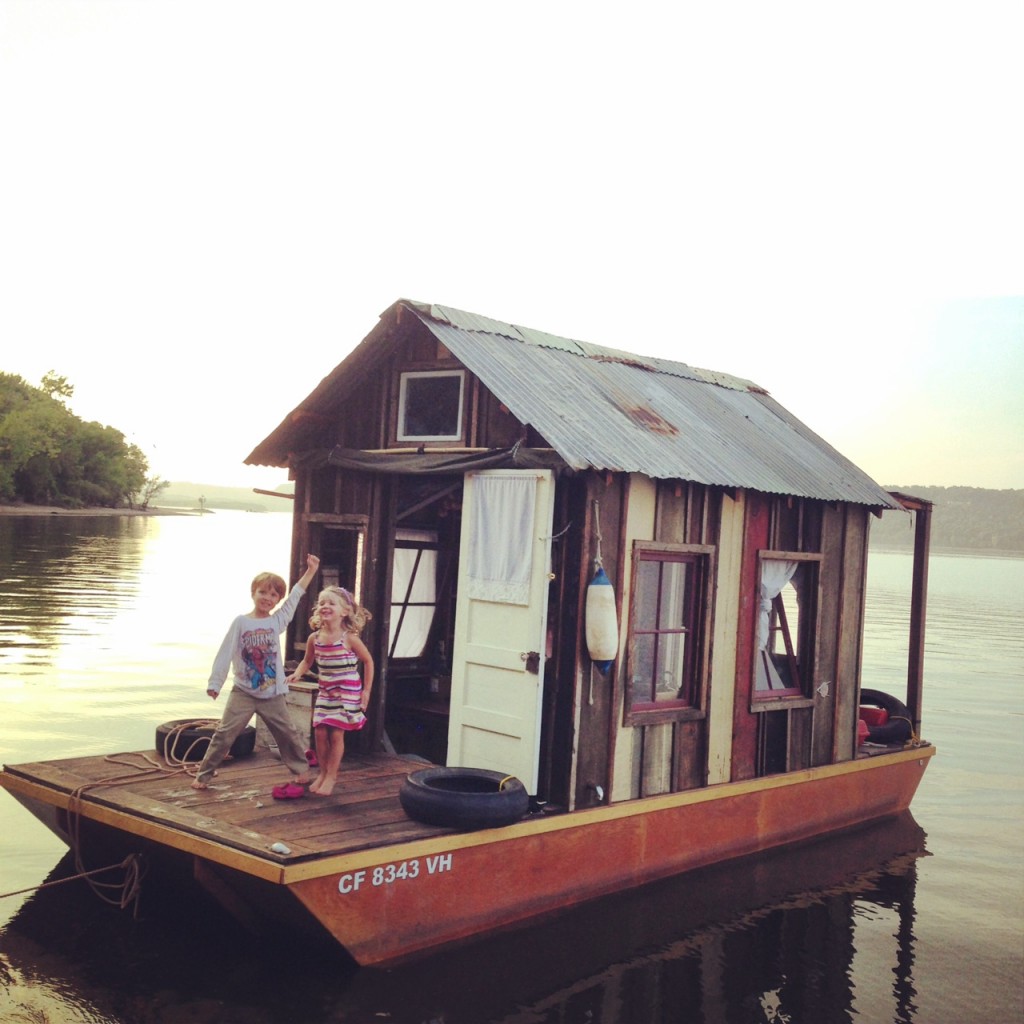 Logan and Emilia aboard the shantyboat

We motored back upstream to Mike’s beach where he welcomed us warmly. He had a house high up on the bluff above the river and used a tram to get up and down the hill. We met his family and had a great dinner with great wine. The family came down to the shantyboat where we gave everyone a tour. The kids Emilia and Logan were probably the most excited.

Mike manages the historic St. James Hotel in Red Wing and helps lead a effort to prevent silting up of Lake Pepin. By coincidence, my earlier interview Jerry had told me about Mike. 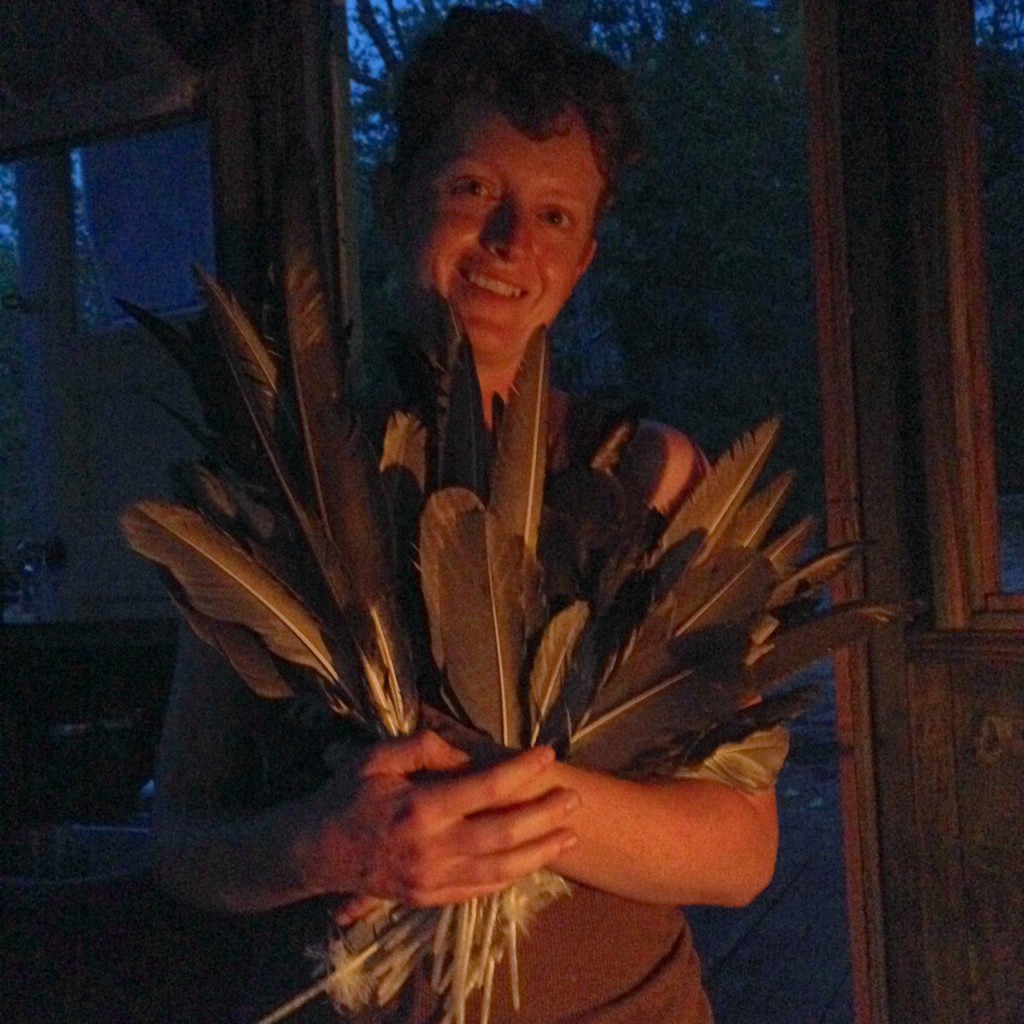 After everyone had left, Kai took a walk and found a vulture rookery along the river’s edge. She gathered a feather or two she brought back in a giant armful to the boat. 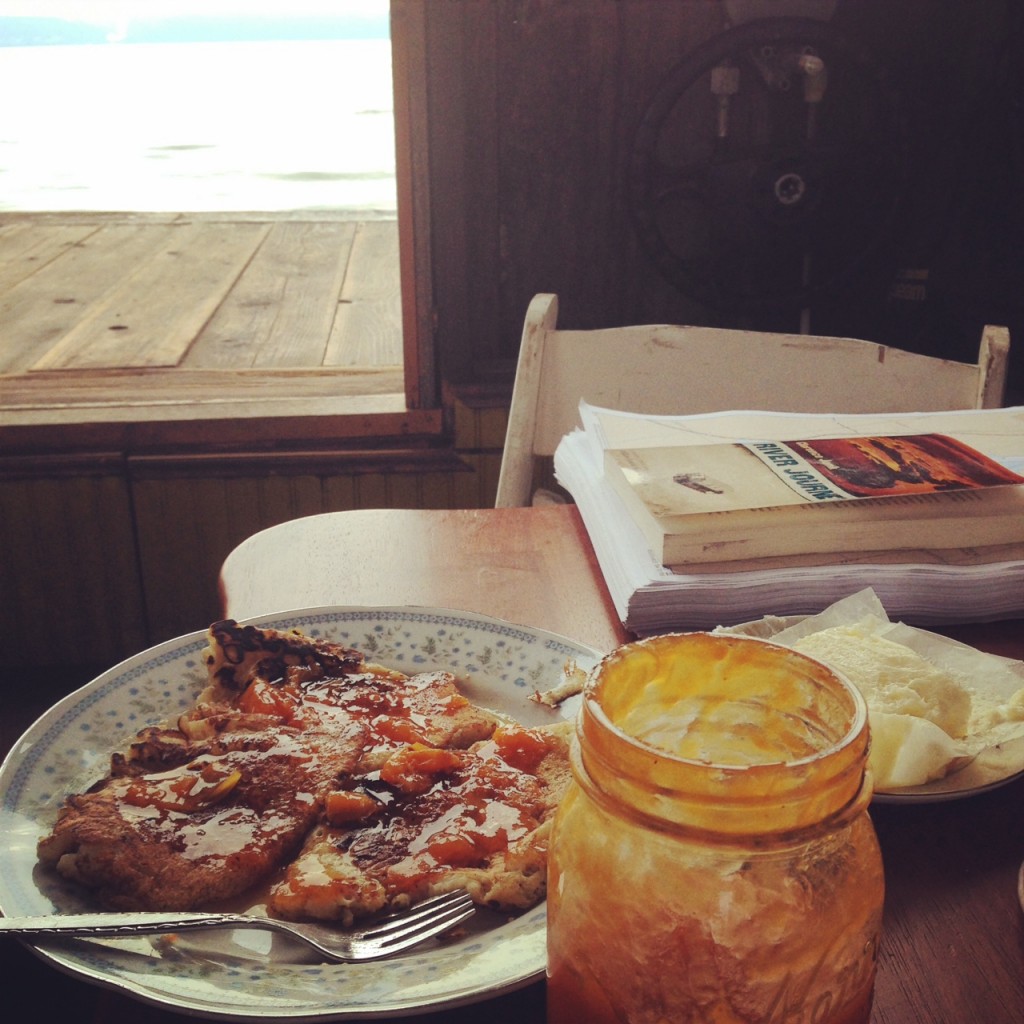 Pancakes with apricot sauce while under way

We had a spotty sleep as the waves were bashing the boat against the beach in a distinctly unpleasant and unsleeply manner. So we gave up sleeping at dawn, took a walk (Kai) and made coffee (Wes) and got under way. 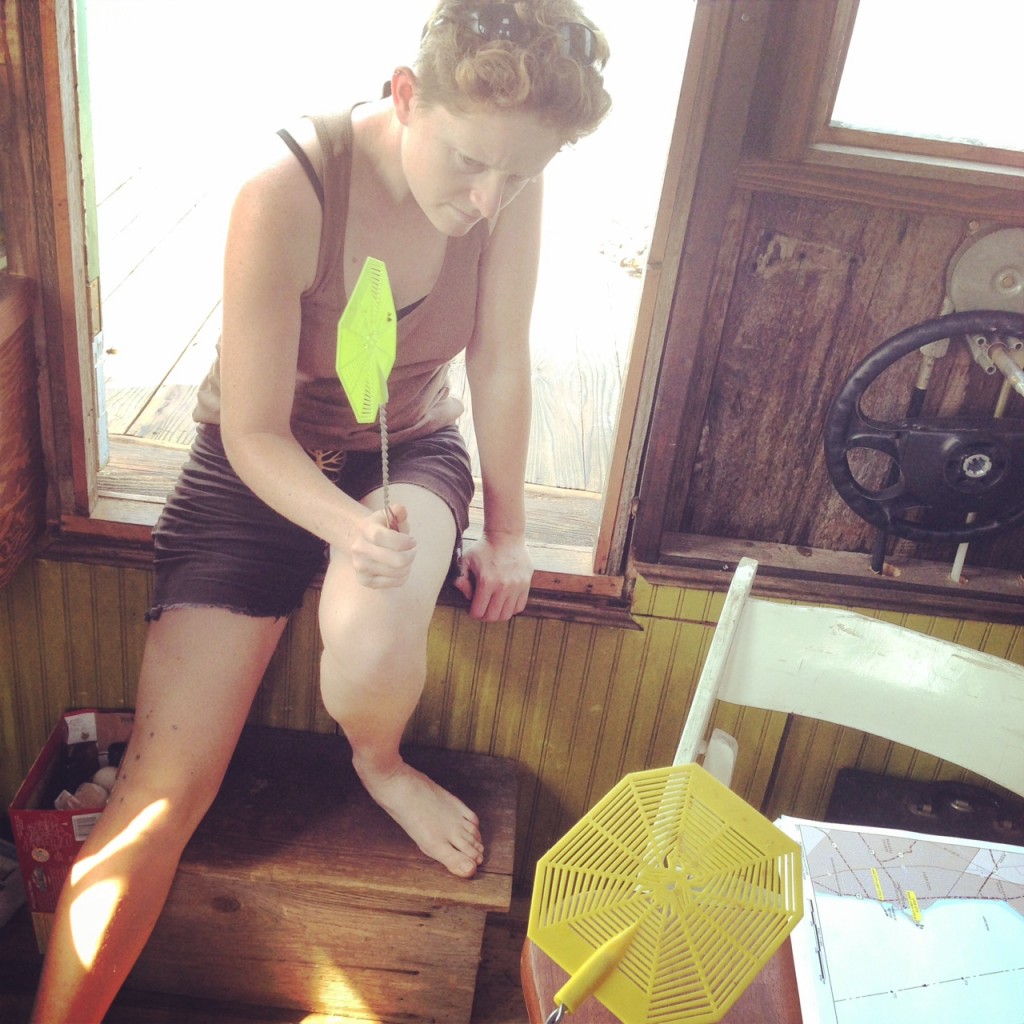 We attempt to reduce the impressive fly population on Lake Pepin

I made pancakes while Kai sat at the tiller and flies buzzed around us mercilessly, biting at our legs and arms. We reduced their population with our flyswatters by a few hundred. Cattle dogs are especially crazy about flies and snap and eat them when they can. Hazel got to a point where she was snapping crazily at flies and darting around the cabin. Kai saved her from certain madness with a special doggy fly-relief tent. 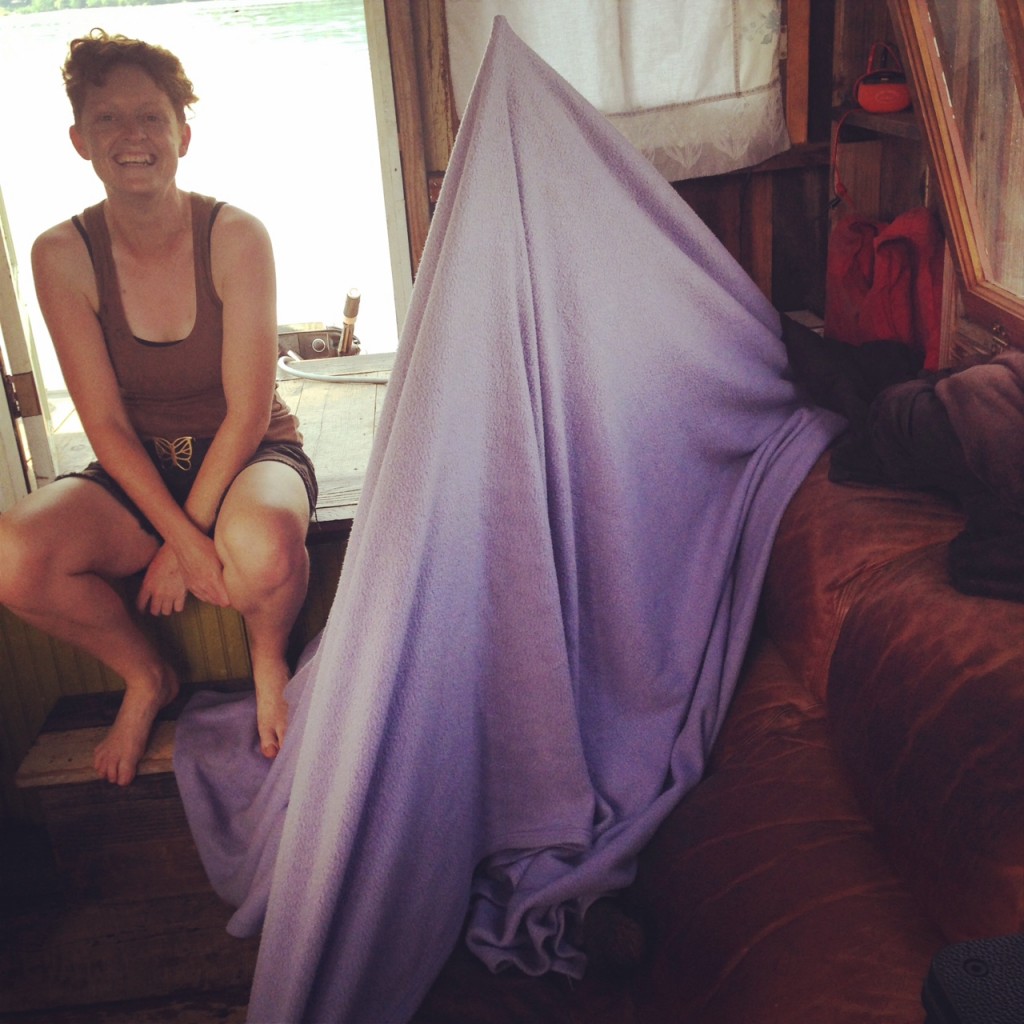 Now we try to make Lake City before we run out of gas and drift to our doom on Lake Pepin.

Engine Troubles, Burger Lexicon, A Theft, and Much Generosity

1 comment for “A High Speed Water Chase, Flyswatting, and Madness”

← Engine Solutions, Party in the Lock, River Days, and a 97 Year Old Woman ← A Watery Death on Lake Pepin Narrowly Averted
Help! We need your support!