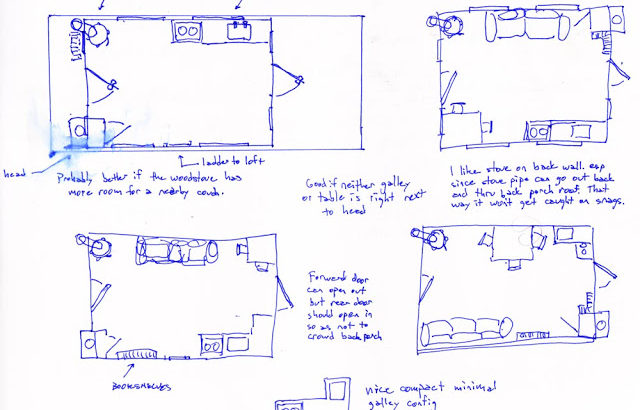 So far, I’ve ignored the inside cabin layout, thinking that it would sort itself out eventually.  But I got thinking, and with a few beers started doodling.  I went to the normally quiet Trout Farm on Zayante Road (the same road on which we will build the shantyboat).  Unbeknownst to me, it was karaoke night at the Trout Farm and so I did my sketches and drank beer while people sang Bonnie Raitt and Sam Cooke.

As you can see, the beer was liberally applied, and not just to me.

First thing I noticed was that in all my previous drawings
I forget the head. Then I had to figure out a good place for it.  We
will bump it out on to the deck a bit and bump it into the room a bit
for a 3 x 3 foot head.  Probably better on the back deck, just because
the bump out looks a little funny in front.

So there are three things that need to be located in a corner:  the head, the galley, and the woodstove.  Actually, the woodstove could go in the middle of a side wall, but it might be in the way.

I have the front door swing out because swinging in on a step down is weird and dangerous.  The back door swings in (despite the step) because otherwise it would interfere to much with whatever’s happening on the back deck.

← Beyond Napkin Plans
Math is Hard – Calculating a Waterline →

← Beyond Napkin Plans ← Math is Hard – Calculating a Waterline
Help! We need your support!