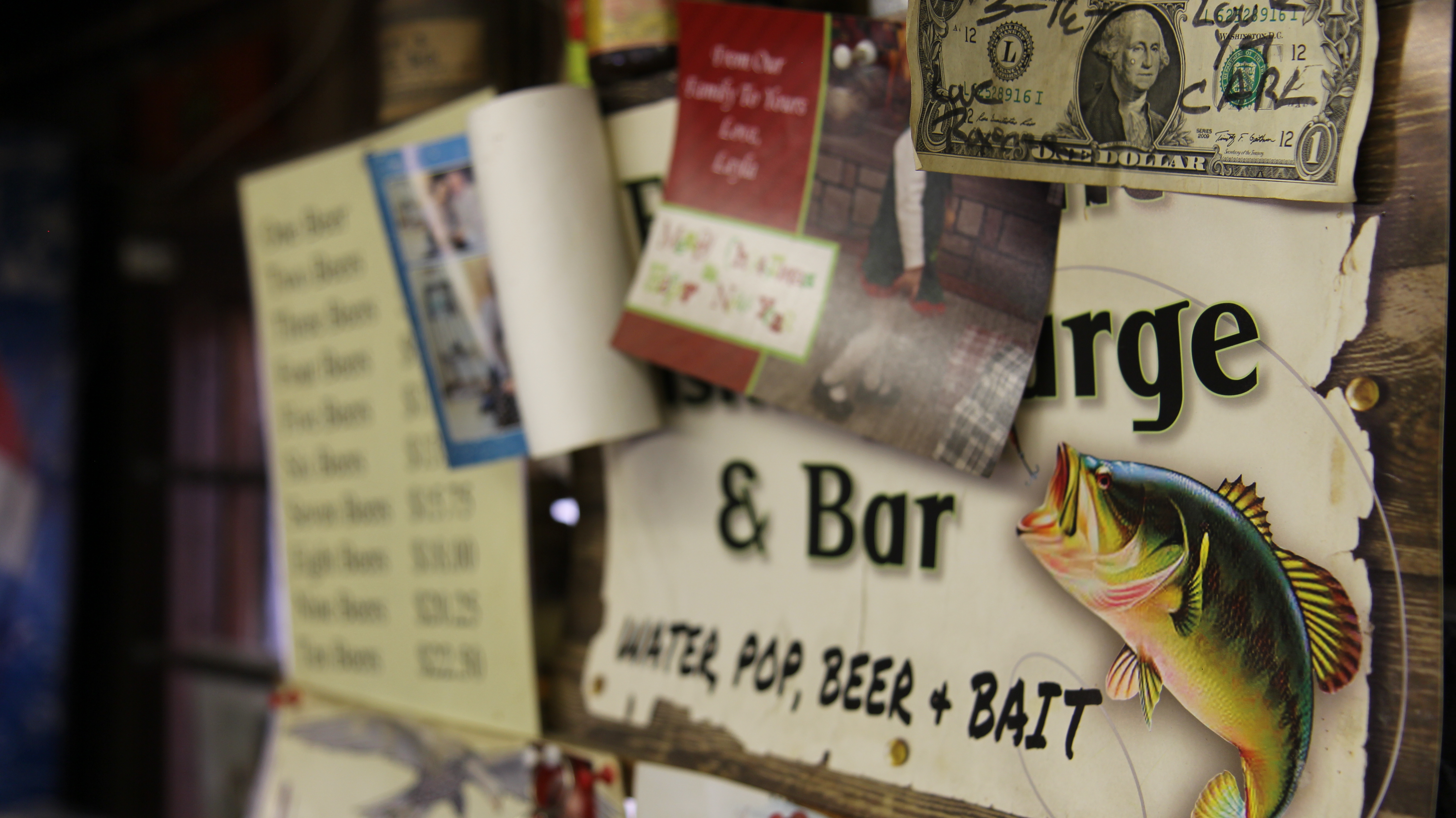 The Magic of the Lock 11 Fishing Barge

After shipsmates Sebastian and Monica and I made a morning run through Lock 11, we headed for the beach below the dam on a whim to chill and make ourselves some breakfast. Pretty quickly, we made the acquaintance of nearby cabin-owners Steve and Chris, and shortly thereafter Ed and TJ. They all came by to take a look at the shantyboat during coffee.

Ed told us we absolutely have to go up around by the dam and check out the fishing barge, which he described as kind of a fishing pier, a bar, a restaurant (sorta), and a bait and tackle shop. I don’t know what I was picturing, possibly a mellow park setting and a touristy bar/restaurant, but what we found was a complete surprise. 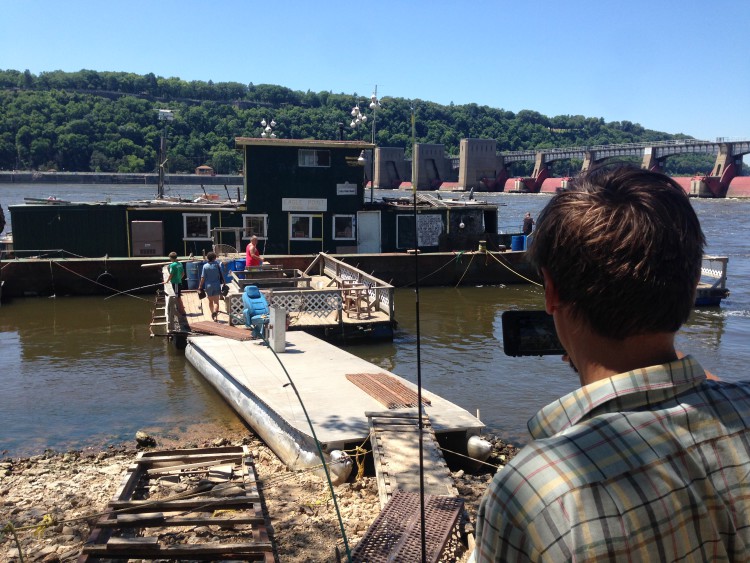 I was doing a little work when Monica and Sebastian came back excitedly with ATVs and told me to hop on. Hazel Dog ran along beside. We rumbled up the rough road through the forest around a lagoon to Ed’s house. Ed’s entire family joined us and outfitted us with poles and tackle. We walked around a small “lake” cut out from the river and up under the outflow from the dam. There at the end of a point, was the Eagle Point Fishing Barge.

It is hard to overstate the drama of the scene, the fishing barge perched right at the turbulent outflow of Dam 11. It felt a little bit like the dramatic image of the USS Palomino perched at the event horizon of the Black Hole in the 1979 Disney movie. None of our photos do it justice. 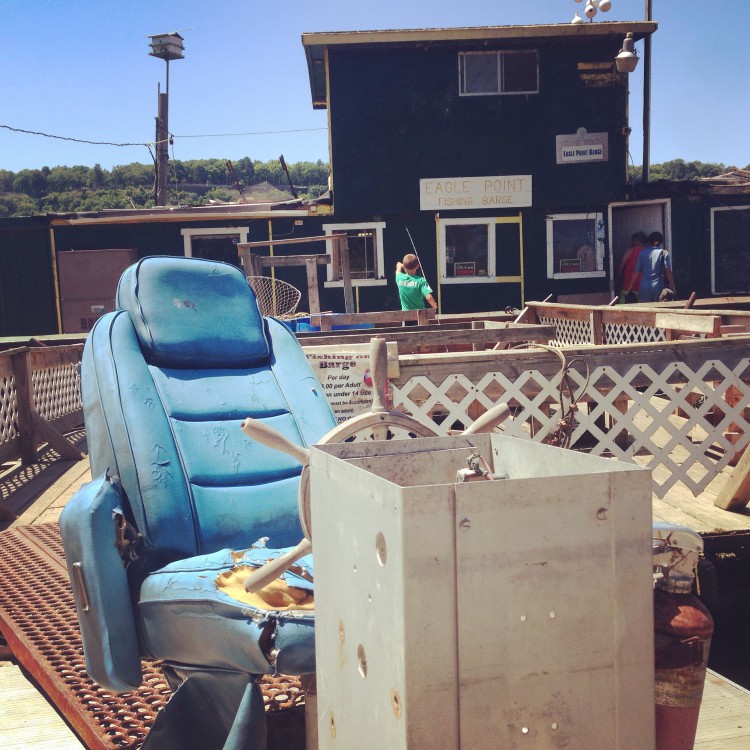 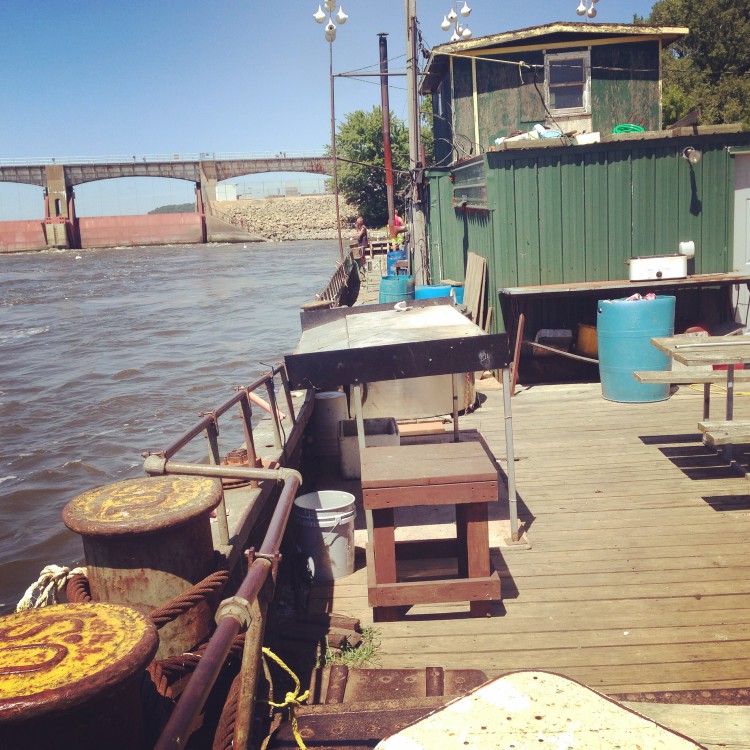 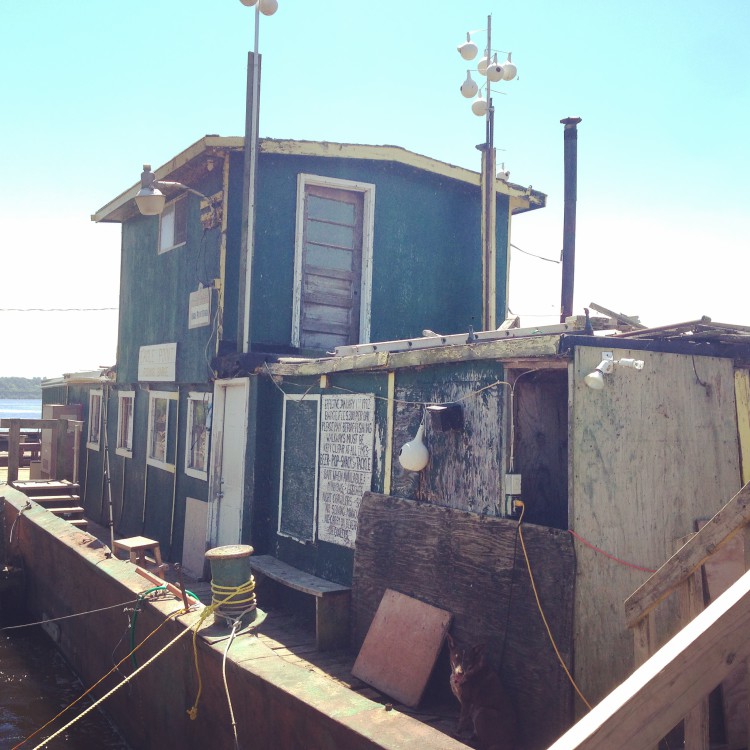 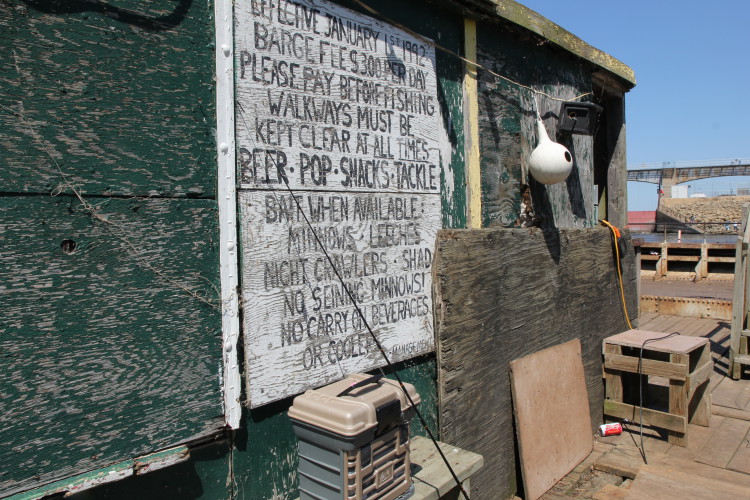 Ed and family immediately started fishing and showing us how to do it. We were using “one eyes,” 1/2 ounce lures with a treble hook top and bottom. The idea was to cast out, let it hit bottom, then snap it up and let it drift back down. We immediately started catching perch and stripped bass. 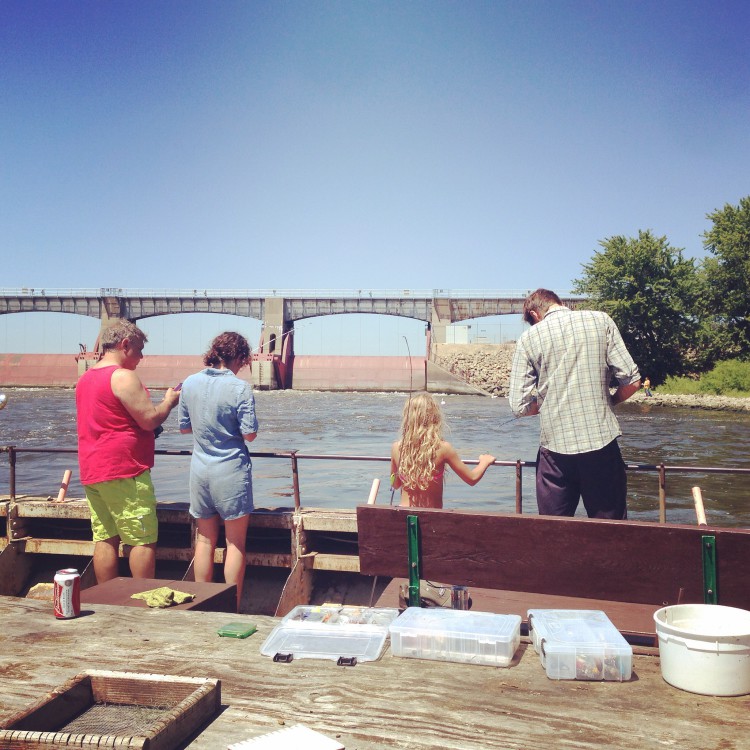 Ed, Monica, Rory, and Sebastian fish the dam end of the barge. 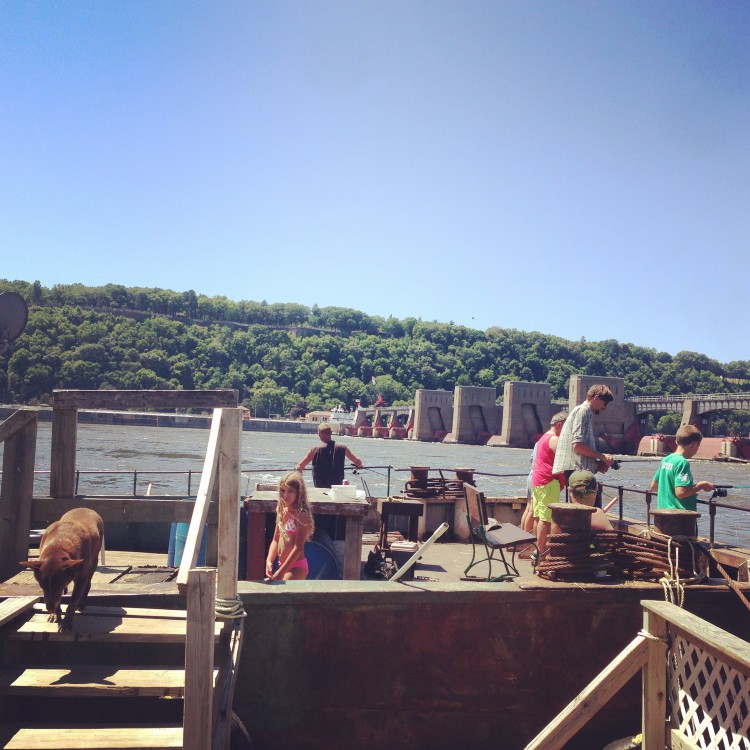 I hadn’t gotten my license yet, despite some effort on the Iowa side, and so I wasn’t fishing. When Monica went to take some pictures I held her pole and had a little fun casting and jigging it. Soon, here comes the Wisconsin DNR warden checking licenses. He’d hung out in the bushes for a while taking photos of who was holding poles. So the end result even after pleading and negotiation was a $200 poaching ticket. After some asskissing, he didn’t confiscate Ed’s tackle which he threatened to do when we tried to tell him I wasn’t really fishing.

The DNR warden told me I could buy my license online, information that was literally a day late and a dollar short. So I got my license online (hoping the warden  would let me off with a warning, but no dice), and fished on. 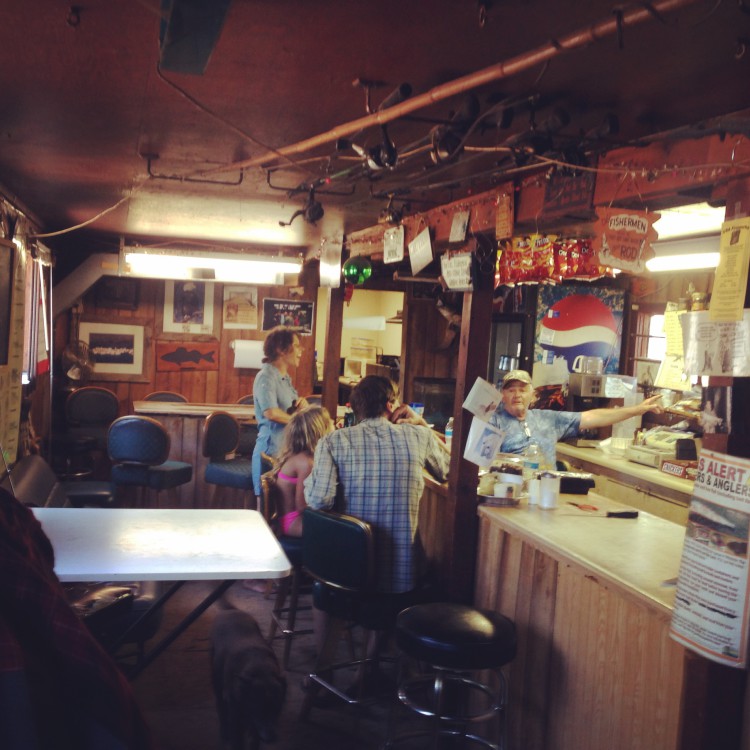 Inside, the place was beautiful in a unique sort of way. Calling it a bar or restaurant was a little exaggerated, but what it lacked in polish, it made up for in huge charm.  The owner Carl was funny and warm. 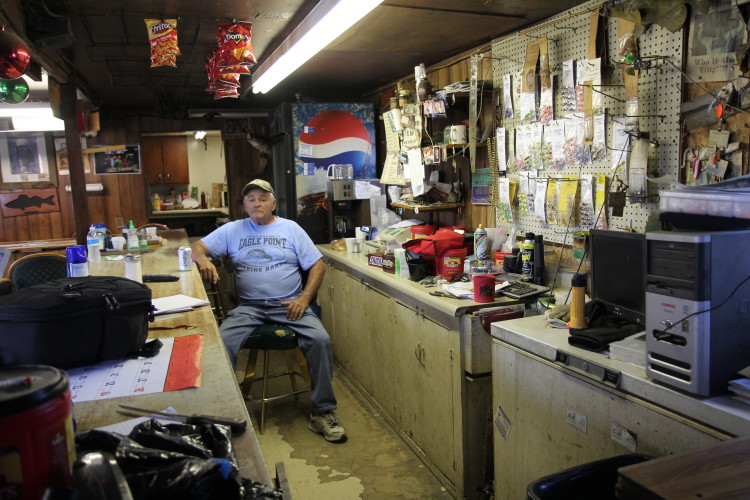 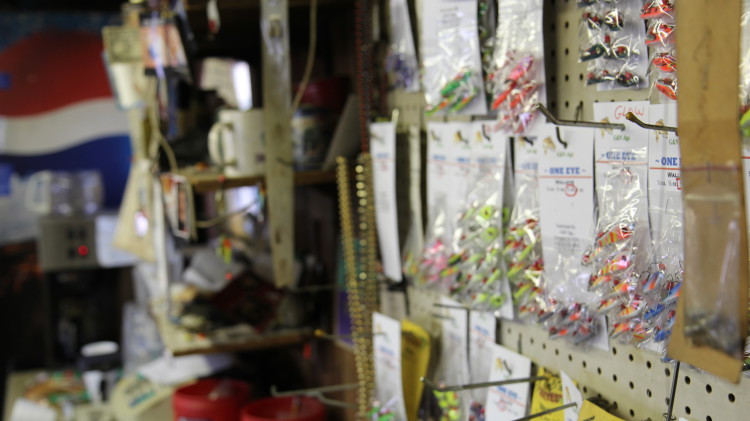 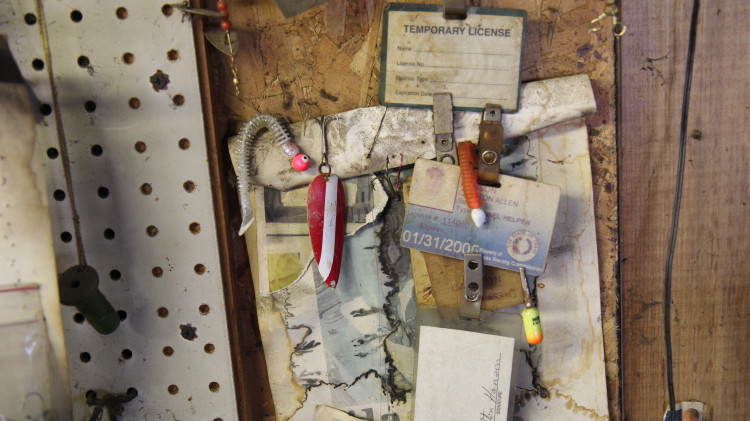 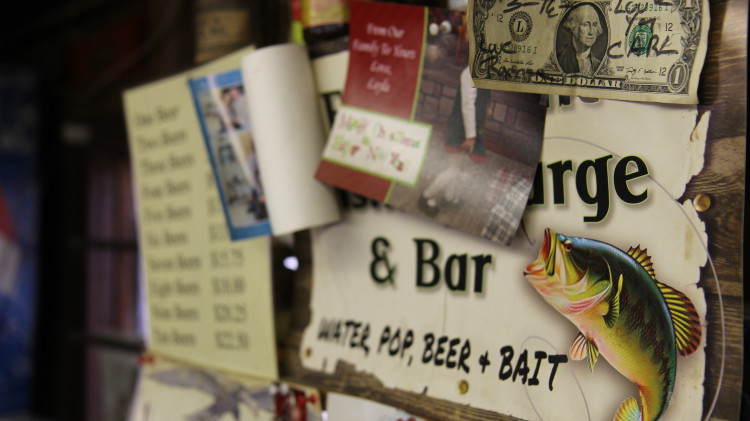 We pulled up a bunch of fish and then Ed, TJ, and Carl turned our catch into an amazing fried fish dinner we ate in the barge.

After Sebastian and Monica left, and Daniella and kids arrived, I told them about the wonders of Carl’s fish barge. I hoped it would hold as much magic for them as it had for us, so I took them there. 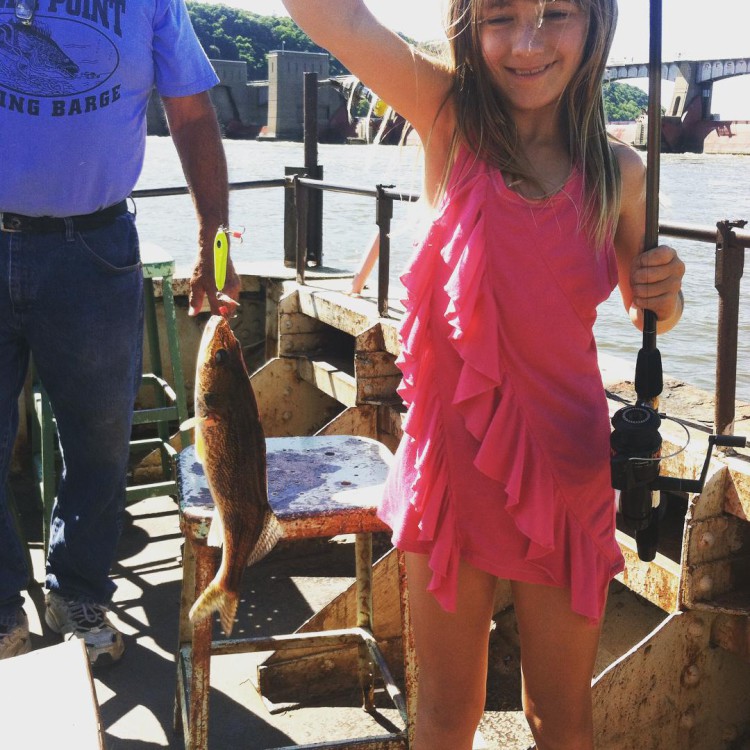 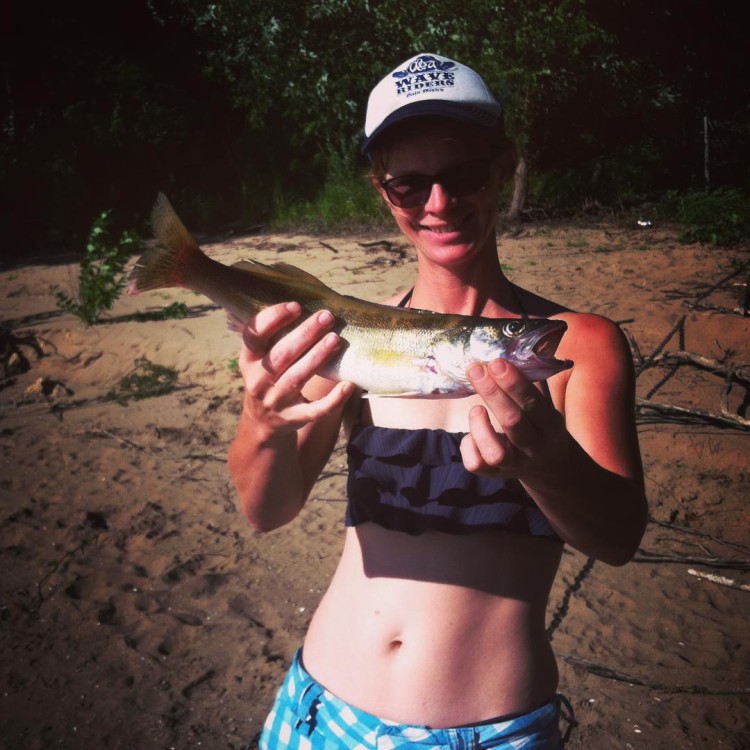 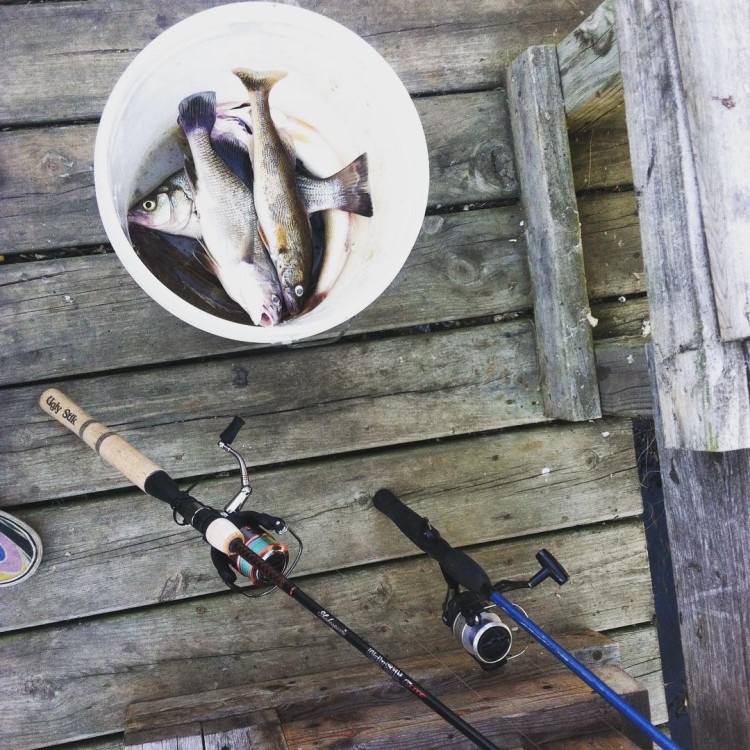 We pulled up plenty of fish for dinner. Fillets at the shantyboat and breading with cornmeal made a yummy meal. Thanks to TJ for showing me how to do an effective fillet. 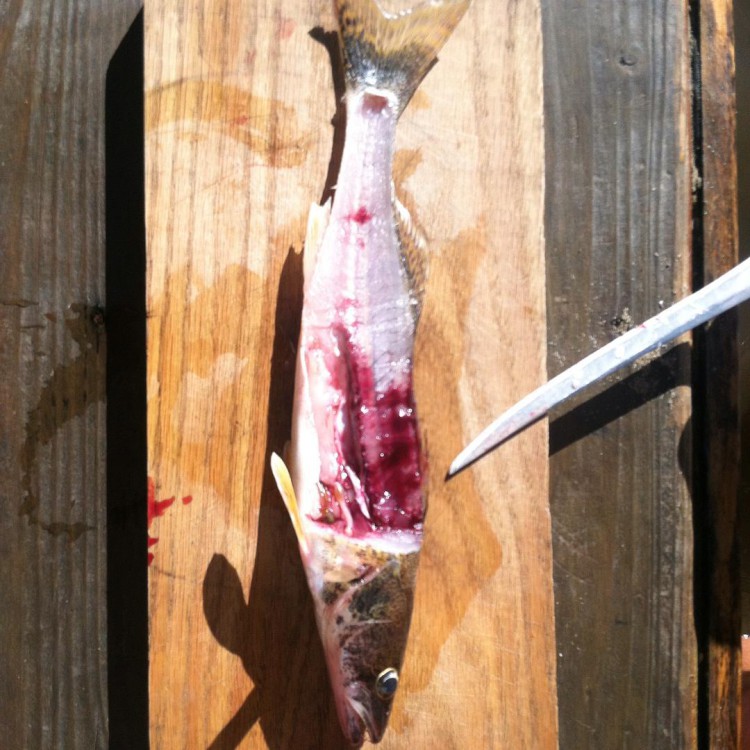 The next morning, I met up with Carl at the barge and did a great long interview where he told me his and the barge’s history, and talked about the river. 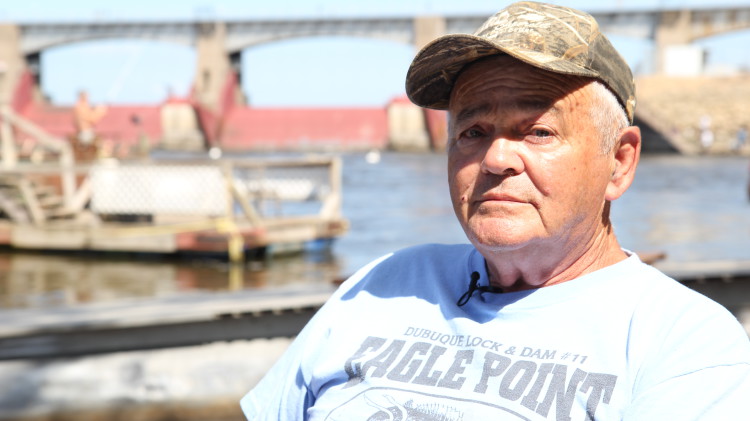 I also got to meet the group of fellas who meet there every morning, rain, snow, or shine to play cards. 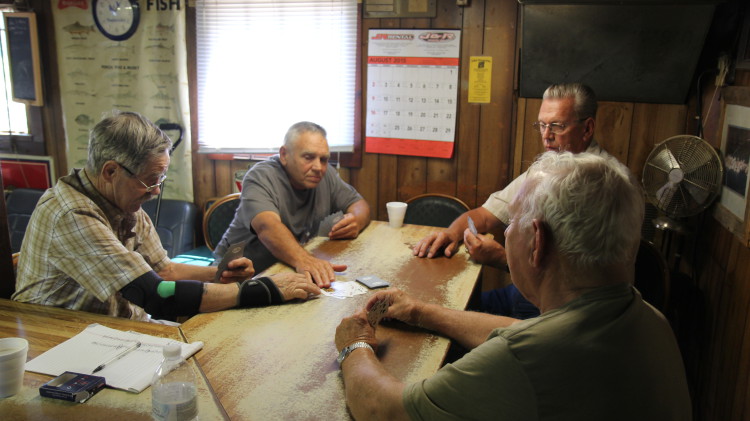 Two Nuns, A Gambler, and an Heiress walk onto a boat… (updated)

Life with the Party People of Galena

An Unexpected Accident, Clamming Goldrush, and Bald Eagles in Lansing

← Hazel on the River
Life with the Party People of Galena →

1 comment for “The Magic of the Lock 11 Fishing Barge”

← Hazel on the River ← Life with the Party People of Galena
Help! We need your support!