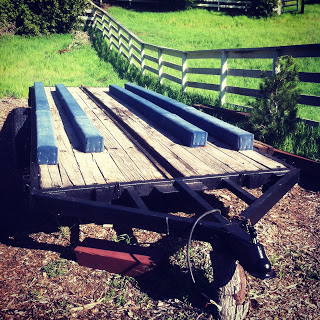 Timeline: Less than a week before the boat flip! The trailer needs several repair welds to make it safe. The clock is ticking.

I got a recommendation for a welder from the same awesome friend at the lumberyard who sold me the skids. I called the guy on an odd Thursday that I was playing hooky from work, a week before the planned boat flip. He said “Are you there now? I’m just up the road from you.”

A few minutes later, he roared in on his Harley chopper, wearing an orange jumpsuit with reflective stripes like a tow truck driver. A big man, white hair in a crew cut, probably in late middle age, who looked like he’d just gotten in a serious bar fight the day before and lost. He introduced himself as Matt and I didn’t ask why he had a black eye.

I showed him the breaks on the center lateral crossbeam. He pointed out that there were breaks on both sides of the trailer, basically, in every place where the crossbeam was welded it was stressed and breaking. He noted that the two pairs of leaf springs met at an arm welded to that crossbeam and that it took a lot of stress.

He said it’d be no problem doing the repair welds, but that what he recommended was replacing that crossbeam.  I said, “Now, it’s beginning to sound expensive.”

“Nah,” he dismissed it, “I can flip the trailer with the crane on my truck, cut out the crossbeam, weld in a new one, and flip it back. Probably take no more than a hour. I think that’s eighth inch. I think I have some quarter inch square stock on my pile at home.”

I was still reeling from all this for a while. No more than an hour? Any one of the steps he mentioned I guessed would take me all day… if I had the proper equipment, which I didn’t. We made a date for the following Tuesday.

I imagined that he’d have one of those sad little cherry pickers on the back of a beefy pickup.  I hoped it wouldn’t be too laborious and that he’d not too badly underestimated the job. 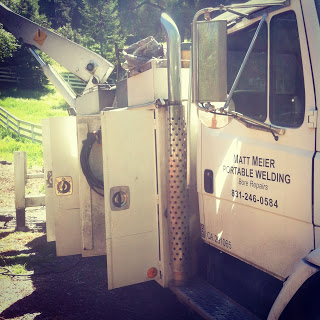 I was at the boat site on Tuesday when he pulled in with his gianormous truck.  Like Santa, he said not a word, but went straight to his work. 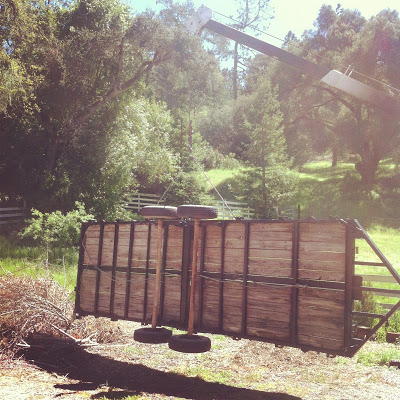 The crane was no cherry picker, but a proper crane with a fancy remote control that Matt deftly wielded.  When he’d said he’d pick up the trailer to flip it, he meant it. Up it went, easy as pie, this enormous 20 foot behemoth tossed around like a toy.

His truck was like Santa’s magic sack. He had attachments for household current, compressed air, arc voltage, everything he needed with hoses and cords all neatly coiled on hooks in back. 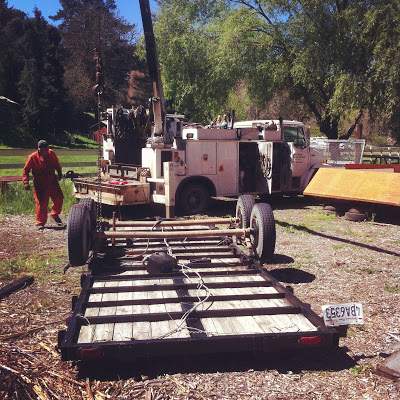 He flipped it over and immediately started cutting out the center crossbeam (visible in the photos above as a thick black line running between the axles) with a nifty plasma cutter that made my cutting torch blush with envy. 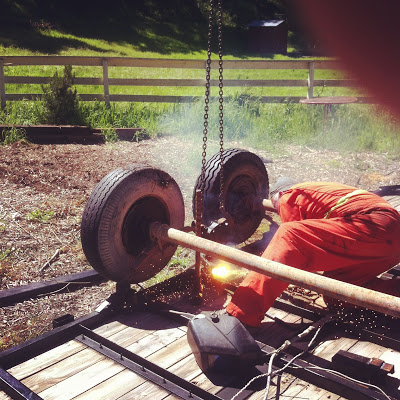 He used the crane to lift while he cut. This took a few minutes or so, with a few sticky parts where the crossbeam was welded better in some places. He mentioned that he was surprised it had lasted as long as it did.

Within minutes he had the old crossbeam out and was cutting the new one to size with a giant chopsaw. I helped him maneuver it into place and he began welding it immediately.  His welds were like beautiful marzipan. They were flawless and elegant. 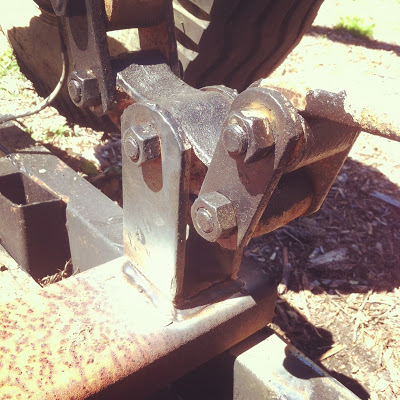 As he finished a section, I’d attack it with a wire brush and coat the still warm weld with Rust-Oleum. 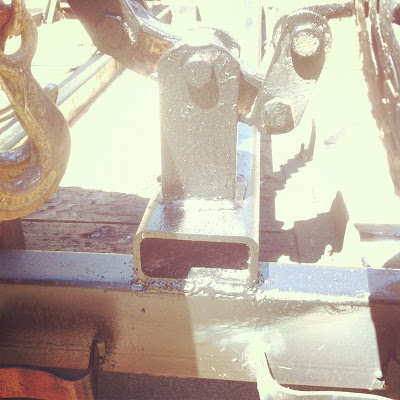 Having the trailer upside down would have made painting the underside considerably easier. I did use the opportunity to hit any rusted metal I’d missed.

Not content to simple fix the suspension, Matt went over the whole trailer, fixing places on the underside where the trailer was inadequately welded or the original builder had simply failed to weld.

When he was all done, the trailer was not simply repaired, but better than it had been when it was constructed. Matt charged me so little for the work, I was little embarrassed. Would that cover the diesel for his truck, the welding sticks he used, the time he made available for me? I hoped so, because he seemed like a really nice guy.

He deftly picked up the trailer and flipped it back over and was on his way.

← And now back to the trailer
Thinking About Cabin Construction →